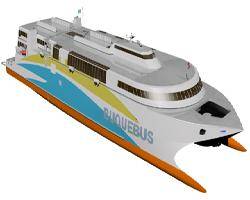 The 99 metre LNG ship was contracted by South American company Buquebus in November 2010, however for commercial reasons Buquebus requested that identity be kept under wraps.   They have now announced that they will operate the vessel on their River Plate service between Buenos Aires, Argentina and Montevideo in Uruguay.

Incat Chairman Robert Clifford says “Incat is excited about this project as it represents a significant step in the global move for natural gas powered ships to replace those operated with less environmentally friendly fuels.

Incat is especially pleased to be building this ship, hull 069, for a repeat customer. Buquebus have clearly demonstrated their preference for Incat technology over a twenty year period and hull 069 will be the eighth that we have built for Buquebus and their associated companies.  It will be the largest catamaran they have operated and the fastest, environmentally cleanest, most efficient, high speed ferry in the world. ”

The yet to be named vessel is under construction at the Incat shipyard at Prince of Wales Bay at Hobart in Tasmania, Australia.   Delivery is anticipated to be in the Southern hemisphere spring of 2012.

Hull 069, with capacity for over 1000 passengers and 153 cars has a projected lightship speed of 53 knots, and an operating speed of 50 knots.  Crossing the River Plate (Rio de la Plata) at high speed will allow the ferry service to compete with airline traffic between Uruguay and Argentina.

The passenger cabin will include tourist, business and first class seating, and over 1000 square metres of extensively fitted out duty free shop, the largest shopping area ever installed on a fast ferry.

The vessel will be the first installation of LNG powered dual fuel engines in an Incat high speed ferry, and the first high speed craft built under the HSC code to be powered by Gas Turbines using LNG as the primary fuel and marine distillate for standby and ancillary use.