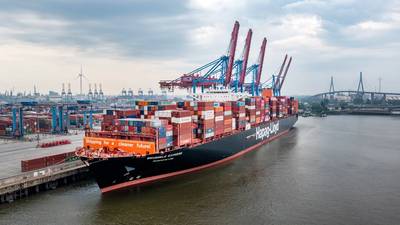 The 15,000 TEU Brussels Express is the first large containership in the world to have been converted to liquefied natural gas (LNG) propulsion, German shipping company Hapag-Lloyd said on Monday, as operators look to LNG fuel to reduce their environmental footprint.

In September 2020, the ship went into the Huarun Dadong Dockyard in Shanghai where the conversion was performed. MAN Energy Solutions converted the ship's MAN B&W 9S90ME-C engine, which was previously operated with heavy fuel oil (HFO), to a MAN 9S90ME-GI dual fuel engine with gas injection and capable of running on both HFO and LNG.

“The fact that a retrofitting of this scale had never been done before meant that we faced numerous challenges, from the planning to the implementation,” said Richard von Berlepsch, Hapag-Lloyd's managing director for fleet management.

A floating crane was used to hoist the 1,300-tonne LNG tank into the ship, and auxiliary diesel engines to natural gas were also converted to natural gas.

In a nod to the European Green Deal, the 2014-built ship was renamed from Sajir to Brussels Express. In addition, the phrase “Shipping for a cleaner future!” adorns the breakwater on the forecastle.

“We have broken new ground with the conversion, and we will now be testing it very precisely in real-world operation,” von Berlepsch said.

Currently operating in the Far East 4 service between Asia and North Europe, the vessel is not yet operating exclusively with LNG, as the final guarantee works will be performed at the end of its current round voyage.

The first complete LNG bunkering is slated to take place in Singapore, and going forward, the ship will bunker twice per round voyage: in Singapore and in Rotterdam.

The shipping sector is under pressure to reduce carbon emissions and last year adopted stricter rules on sulphur content in marine fuel.

Operators are turning to cleaner burning LNG fuel for various types of commercial vessels, from tugs to tankers. LNG emits 21% less CO2 than fuel oil and substantially less particulate matter, according to a 2019 Deloitte report on shipping fuels.

While the use of LNG as fuel for newbuild ships continues to gain traction, the refit of existing ships to LNG has been slower in developing, owed mainly to the design challenge to fit new systems—particularly oversized fuel tanks—on existing hulls.

“Fossil LNG is currently the most promising fuel on the path towards zero emissions. The medium-term goal is to have CO2-neutral shipping operations using synthetic natural gas (SNG),” von Berlepsch said.

Global Ship Lease announced on Wednesday that it has agreed to purchase four 5,470 TEU Panamax containerships with an average…