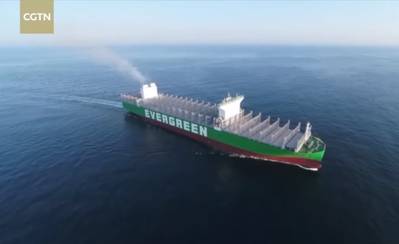 Chinese shipbuilders have handed over the 24,000 TEU capacity Ever Alot to Taiwanese shipping company Evergreen Marine.

The newbuild, built by Hudong-Zhonghua Shipbuilding (Group) Co., Ltd., a subsidiary of the China State Shipbuilding Corporation (CSSC), is said to be the new world's largest containership. The vessel is 399.99 meters long and 61.5 meters wide, with a deck area of 24,000 square meters and a cargo compartment that's 33.2 meters deep.

Once in operation, it will service routes between Europe and the Far East.

The ABS-classed Ever Alot is the seventh ship delivered in Evergreen Marine's series of 13 Evergreen A class ultra-large containerships and the first in the world over 24,000 TEU.

The six previously delivered Evergreen A class mega ships are 23,992 TEU, all built by Samsung Heavy Industries in South Korea.