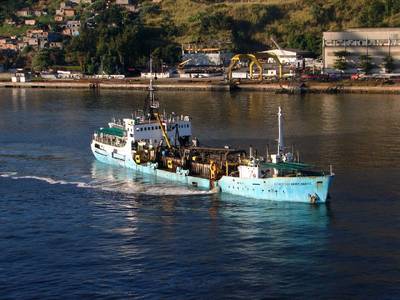 LUSCHI announced an acquisition of a 1,330 m³ Trailing Suction Hopper Dredger - TSHD to its fleet. The equipment named Recreio do Bandeirantes will become LUSCHI X after formalizing purchase between LUSCHI and BIC Bank, this Wednesday, June 4.

The vessel has 77.5 m length, 13 m width and dredging depth up to 22 m. Moreover, it is equipped with waterjet in the cutter head, waterjet at the doors of cisterns, barge loading system and "bow thruster", a type of propellant that provides greater maneuverability for vessels. “To meet the increasing demand of dredging, we invest in high-tech equipment capable to performing dredging with low maintenance costs and higher productivity level,” said Roberto Britto, director of logistics LUSCHI.

After performing the technical revisions and mechanical adjustments to the equipment, LUSCHI X is expected to be ready to begin its operations in August, running maritime related works in Brazil and South America.

Recently, the group acquired a 2,000 m³ hopper dredge, LUSCHI IX, which currently plays a strong role in the second phase of dredging of the Rio Grande shipyard in the South. “By purchasing equipments of this size, LUSCHI reached a potential market in terms of dredging capacity, such accomplishment, designs LUSCHI to target markets outside of Brazil and throughout Latin America,” said Roberto Britto, director of logistics LUSCHI

LUSCHI has been involved in dredging activities related to the environmental, especially, in the treatment of contaminated sediments, which makes it the largest dredging company of Brazil in this segment.