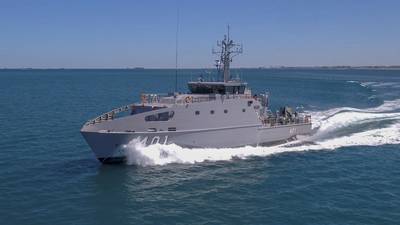 Australian shipbuilding group Austal Limited announced that the Australian Government has ordered an additional Guardian-class Patrol Boat from Austal Australia for A$15.2 million.

The 39.5-meter steel hull patrol boat, to be constructed in Western Australia and delivered in September 2024, is in addition to the 21 Guardian-class Patrol Boats ordered by the Australian Government under the Pacific Patrol Boat Replacement Project (SEA3036-1) in 2016.

Fifteen of the 21 vessels have been delivered to 11 Pacific Island nations under the Australian Government’s Pacific Maritime Security Program, since 2018.

Austal Chief Executive Officer Paddy Gregg said the additional Guardian-class Patrol Boat is a great sign of confidence in both the vessel platform and Austal’s capability to design and construct naval ships.

“The steel hull Guardian has proven to be an exceptionally capable patrol boat in a short period of time, with 15 delivered to date and operating throughout the South Pacific.

Faster than the previous Pacific-class patrol boats, with improved seakeeping, better amenities, and an enhanced mission capability – including an integrated RHIB stern launch and recovery system – the Guardian-class Patrol Boat provide Pacific Island nations with a much-improved naval asset to carry out border patrols, regional policing, search and rescue, and many other operations domestically and internationally.

The Pacific Patrol Boat Replacement Project (SEA3036-1) was awarded to Austal Australia in May 2016, with an additional contract option awarded in April 2018, taking the program to 21 vessels, valued at more than A$335 million. Twelve Pacific Island nations including Papua New Guinea, Fiji, the Federated States of Micronesia, Tonga, Solomon Islands, Cook Islands, Kiribati, Marshall Islands, Palau, Samoa, Tuvalu, Vanuatu and Timor-Leste will receive the vessels through to 2023. The Pacific Patrol Boat Replacement Project supports more than 200 jobs at Austal Australia (directly) and a further 200 jobs indirectly, nationally, through Australian businesses contracted by Austal.