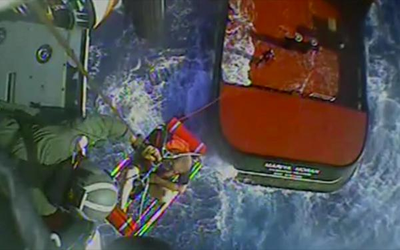 Coast Guard Sector St. Petersburg command center watchstanders received a call via satellite phone at 1:24 p.m. from the master of the Mariya Moran, a 120-foot tug, stating a crew member was suffering from chest pains and was in need of medical attention.

The Jayhawk crew hoisted the man and transported him to Tampa General Hospital at 5:42 p.m.

“This case happened a long way from shore and thankfully they had a satellite phone aboard,” said Lt. j.g. Richard Laws, crew member at the Sector St. Petersburg command center. “They were professional mariners with the proper equipment aboard that allowed them to communicate the nature of distress to the Coast Guard.”