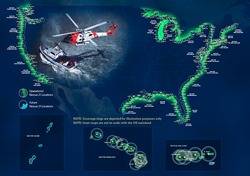 "I am extremely proud to have supported the Rescue 21 program since its inception almost a decade ago.  This project represents a successful partnership between government and industry," said U.S. Senator Susan Collins.  "As we celebrate the inauguration of Rescue 21 in northern New England, we do so with the confidence that this investment will save the lives of Maine's fishermen and recreational boaters by improving the Coast Guard's search and rescue capabilities along Maine's coast."

Rescue 21 is interoperable with other federal, state and local enforcement agency communication systems, enhancing inter-agency cooperation and enabling the Coast Guard and its partners to be more effective responding to security and marine environmental threats. The Rescue 21 towers and command centers are also designed to accommodate additional sensors and command and control equipment, which adds cost-effective capabilities to the Coast Guard's maritime security mission.