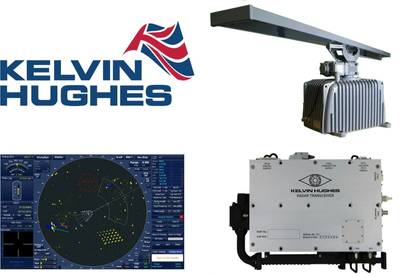 Kelvin Hughes, a company in the design and supply of navigation and security surveillance systems, has announced the installation and commissioning of a SharpEye radar system on the South African Navy’s fleet replenishment ship, SAS Drakensberg.

With its advanced target detection capability, the solid-state SharpEye provides an industry leading level of maritime situational awareness. Through the digital pulse compression and Doppler processing of the radar returns, SharpEye can detect objects with a low Radar Cross Section (RCS), from semi-submersed objects to the smallest of uncooperative craft, even in the most severe of weather conditions. With the integral Agile Tracker, the radar system provides reliable target tracking performance against fast, highly manoeuvrable surface and air targets.

The SAS Drakensberg is the largest, most sophisticated naval vessel to have been wholly designed and built in South Africa. Her primary role is to support and assist naval vessels at sea, enabling the South African Navy to deploy its forces for extensive periods over long distances. Because the ship is designed and equipped to operate two large helicopters simultaneously, a key benefit of the Kelvin Hughes radar system is its ability to provide a Helicopter Control and Tracking capability which satisfies the requirements of flight safety.

Tubes and Piping Most Prone to Failure -Report

When it comes to components failures in the maritime and oil and gas industries, tubes and piping are the top offenders,…