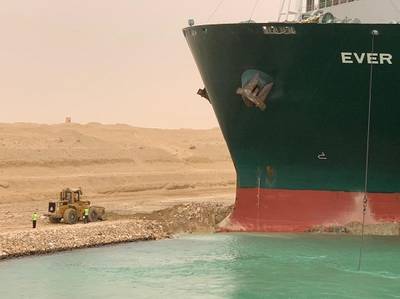 A container ship heading to Rotterdam ran aground in the Suez Canal on Tuesday, blocking other vessels from transiting one of the world's most important waterways, according to shipping company GAC and shipping data on Refinitiv Eikon.

The 200,000-tonne vessel en route from the Red Sea to the Mediterranean ran aground at about 7:40 a.m. (05:40 GMT) on Tuesday after the ship suffered a blackout, GAC said on its website.

It added that 15 other ships in the northbound convoy behind the vessel were detained at anchorages waiting for the Canal to be cleared. A southbound convoy was also blocked, GAC said.

The Suez Canal authorities and Higaki Sangyo Kaisha Ltd, the owner and manager of the ship, could not be immediately reached for comment.

About 12% of the world trade volume passes through the man-made canal, which is a major source of hard currency in Egypt.