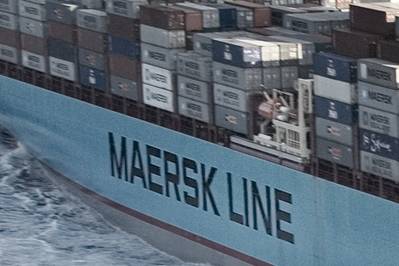 U.S. flagged containership Maersk Kensington reported a fire in a cargo hold while en route from Salalah, Oman toward Suez. The fire is the second reported aboard a Maersk vessel this month.

The fire has been contained and all 26 crew members are reported safe and accounted for, according to A.P. Moller-Maersk.
The vessel is carrying 3,518 containers (corresponding to 5,616 TEU) and is currently at anchor outside the port of Salalah where it is receiving assistance from shore.
The 6,188 TEU Maersk Kensington is owned and operated by Maersk’s U.S. subsidiary Maersk Line, Limited (MLL).
The cause of the fire is unknown but is believed to be unrelated to the deadly fire that broke about aboard another Maersk containership earlier this month.
On March 6, a fire in a cargo hold aboard the Singapore flagged Maersk Honam killed five and injured several others while the ship was sailing in the Arabian Sea.