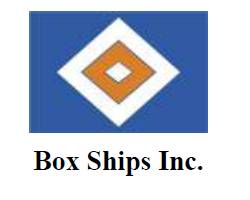 The MSC Siena and the CMA CGM Kingfish are the fourth and fifth vessels of the six vessels comprising the Company’s initial fleet, as identified prior to its Initial Public Offering. The sixth remaining vessel is expected to be delivered by May 31st, 2011 expanding the Company’s fleet to a total of six containerships with a TEU weighted-average age of 2.5 years, a total capacity of 28,177 TEUs and a weighted-average remaining charter duration of 35.3 months.

Commenting on the recent events, Michael Bodouroglou, Chairman, President and CEO of the Company stated “We are pleased that we were able to work to take delivery of five of the six vessels in our initial fleet well in advance of our original timetable, which will have a positive effect on our cash flow for the second quarter of 2011. Our policy is to pay a quarterly dividend to our shareholders supported by our investment in young containership vessels with fixed employment that we expect will generate consistent cash flows and high utilization rates.”