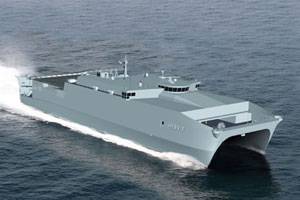 Austal has won the contract to design and build the US Department of Defense’s next generation multi-use platform, the Joint High Speed Vessel (JHSV), as part of a program potentially worth over US$1.6 billion.

As Prime contractor, Austal will design and construct the first 103-metre JHSV, with options for 9 additional vessels expected to be exercised between FY09 and FY13.

Similar to the Austal-built “WestPac Express” operated by the US Marines for the past seven years, the JHSV will be capable of transporting troops and their equipment, supporting humanitarian relief efforts, operating in shallow waters and reaching speeds in excess of 35 knots fully loaded. The vessels will be a joint-use platform operated by both the United States Army and Navy.

The vessels will be built at Austal’s US shipyard located in Mobile, Alabama, where work is continuing on the first phase of a new Modular Manufacturing Facility (MMF). Upon completion in mid-2009, the first half of the 70,000 m2 MMF will be available for the fabrication of all JHSV modules.

Austal USA’s 1000-strong workforce, which is currently completing the US Navy’s 127 metre Littoral Combat Ship “Independence” (LCS 2), as well as a 113 metre high speed catamaran for Hawaii Superferry, will grow to more than 1500 as a result of the JHSV program.

“As demonstrated by the two Hawaii Superferry vessels recently constructed at our Mobile, Alabama facilities, our US shipyard has the capability to deliver large high speed advanced aluminium platforms on time and on budget - a capability which will be further enhanced upon completion of the MMF and the expansion of our US workforce,” Mr Browning said.

Sea trials of the recently-christened “Independence” (LCS 2) are scheduled to commence early next year. Mr Browning said the US Navy’s ongoing commitment to a 55-vessel LCS program, as part of its 313 ship fleet, meant there was strong chance Austal would be awarded a second LCS in early 2009.