Crowley Sells 44-year-old Tug: 'The Fastest in the Puget Sound' 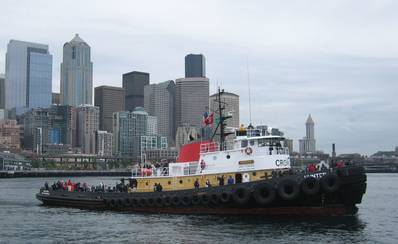 Crowley Marine Services Inc. has sold one of its 7,200BHP Invader series tugs, Hunter, to private buyers in Washington.

Often referred to as the “fastest tug in the Puget Sound” due to its frequent tug race wins at the Seattle Maritime Festival, Hunter is powered by twin EMD 20-645E5 diesels with Falk 4.345:1 gears driving two 132" x 82-88" 5-blade stainless props. Electrical service is provided by two 90kW CAT D3304 gensets.

Marcon International acted as sole broker in the transaction and represents the 124th vessel brokered by Marcon for Crowley Maritime over the last 34 years.