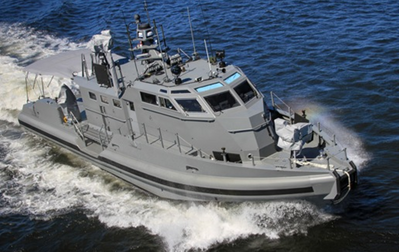 SAFE Boats International (SBI) recently delivered a 65-foot Coastal Command Boat (CCB) to the U.S. Navy’s Coastal Riverine Group 1 in Coronado, California. The CCB is the first vessel of if its kind and represents the next generation of the Naval Expeditionary Combat Command (NECC)’s fleet of patrol boats and combatant craft. Its unique combination of size and agility enable it to patrol shallow littoral areas as well as deeper, open-water regions.

The 65-foot CCB is an early variant of the soon to be delivered, 85-foot MKVI Patrol Boat. The CCB is powered by twin diesel engines and water jets, is capable of speeds in excess of 35 knots and can maintain cruise speed for up to 24 hours. It features a pilothouse and a main deck cabin with shock mitigating seating for up to 18 crew members and features integrated working stations along with a separate galley, head, shower facilities and engine room. The CCB is equipped for crew served and remotely operated weapon systems, advanced thermal imaging and features a hydraulic crane system.

The vessel was manufactured at SAFE Boats International’s Large Craft Production Facility (LCPF) at the Port of Tacoma, Washington and is one of the largest platforms the company has produced to date. U.S. Navy personnel recently underwent specialized training at the LCPF’s newly launched training center, also located within the Port of Tacoma, where everything from vessel operation to advanced systems maintenance was taught. The CCB was then taken to the northern Puget Sound where extensive testing was performed prior to delivery.