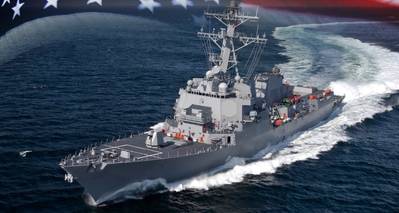 In 1966, Gallagher, who immigrated from Ballyhaunis, Ireland in 1962, joined the Marine Corps where he served in H-Company, 2nd Battalion, 4th Marine Regiment, 3rd Marine Division during Operation Hastings in the Republic of Vietnam.
"Lance Corporal Gallagher is an American hero. His exemplary service in defense of our nation and his strength and sacrifice leaves an example for all servicemen and women to emulate," said Spencer. "His legacy will live on in the future USS Gallagher and his heroic actions will continue to inspire future Sailors and Marines."
Gallagher was awarded the Navy Cross for his actions on July 18, 1966, when he selflessly threw his body on an incoming grenade, shielding his fellow Marines. He quickly pitched the grenade to a nearby river where it safely exploded out of harm's way, without injury to himself or others. Gallagher was killed in action one year later in DaLoc near De Nang on March 30, 1967. He is one of only 30 known Irish citizens to have died in the Vietnam conflict.
Arleigh-Burke class destroyers conduct a variety of operations from peacetime presence and crisis response to sea control and power projection. The future USS Gallagher (DDG 127) will be capable of fighting air, surface and subsurface battles simultaneously, and will contain a combination of offensive and defensive weapon systems designed to support maritime warfare, including integrated air and missile defense and vertical launch capabilities.
The ship will be constructed at Bath Iron Works, a division of General Dynamics in Maine. The ship will be 509 feet long, have a beam length of 59 feet and be capable of operating at speeds in excess of 30 knots.