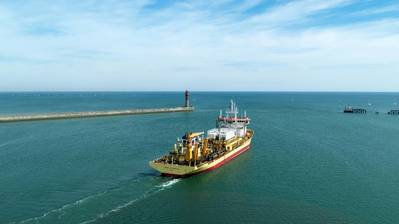 The DSDu team encountered and helped to solve a series of unforeseen challenges, challenges which included revisions to the detailed engineering after a decision was taken to install different engines than originally planned, engines that were considerably larger than those first specified. The solution included the building of a new engine room in the DSDu workshop.

With the new engines came the need for a connection solution, specifically the interface linking the electrical facilities to the new engines as well as piping. As with most vessels, the cabling was complex the mandate was to reduce as much as possible the number of cables needed for the interface. In regards to the piping, 25 tons of piping were re-engineered, fabricated and installed.

Samuel de Champlain was built in 2002 and is the largest vessel in the GIE Dragages-Ports fleet. Based in the Grand Port Maritime of Nantes-Saint-Nazaire, it divides time between the Loire and Seine estuaries. The conversion project was made possible by a subsidy from the European Commission’s Innovation and Networks Executive Agency (INEA) via its Connecting Europe Facility program.