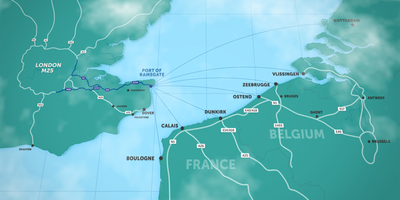 Work began on Thursday to extend a small British port that could serve as a back-up if the UK leaves the European Union with no trade deal, providing the government some respite after days of criticism.

Less than three months before Britain leaves the EU on March 29, the transport minister has been forced to defend awarding a 14 million pound ($18 million) contract for shipping goods to a new ferry company that has no ships.

On Thursday the company, Seaborne Freight, came in for further criticism when its business terms and conditions showed references to placing "any meal/order", prompting speculation on social media that it had copied the format from a takeaway delivery company.

"Seaborne Freight. No ships, no trading history and website T&Cs copied and pasted from a takeaway delivery site," Tom Watson, deputy leader of the opposition Labour Party, said on Twitter.

The Department for Transport said the company's section on terms and conditions was put up in error and the company said it was updating its website as part of the launch.

But the furore has raised questions over whether Prime Minister Theresa May's government has sufficient resources to prepare for its exit from the world's biggest trading bloc after 46 years.

Currently, Britain's EU membership means that trucks drive smoothly through border checks within the bloc. But in a no-deal Brexit, even a few minutes' delay at customs for each truck could mean vehicles backed up at ports and queued on feeder roads on both sides of the Channel.

The port at Ramsgate could be used if customs checks clog the main terminals of Calais in France and Dover and Folkestone in Britain. The dredging will enable greater access for roll-on roll-off (RORO) ships and could help ease potential congestion.

Seaborne Freight, which has never previously operated a ferry route, told Reuters on Thursday the dredging work had begun and was due to take about 25 days to complete, depending on the weather.

It said it had been working over the last two years to offer once more a service between Ramsgate and Belgium's Ostend - reopening a route that had closed in 2013.

The start date for its new service has been delayed until late March from an initial mid-February timeline. The company aims to operate two ships initially, which would increase to four vessels by late summer.

Shipping officials have voiced concerns given the complexities of finding RORO ships, which are usually booked in advance, as well as ensuring that smaller ports can provide the proper back-up if needed.