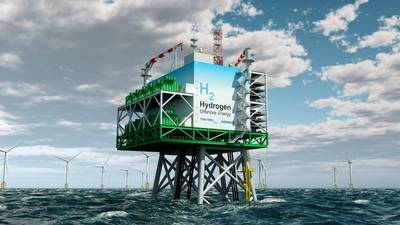 The platform model from Tractebel contains a complete plant for the industrial production of CO2-neutral “green” hydrogen from offshore wind energy. Image: Tractebel

Tractebel Engineering GmbH and Tractebel Overdick GmbH are developing a concept for an offshore platform which makes it possible to produce hydrogen from offshore wind energy at an industrial scale using electrolysis.

The companies, both part of French energy group Engie SA, announced that the concept consists of an up to 400-MW plant for the production of renewable hydrogen via electrolysis at an industrial scale.

This kind of plant exceeds the output of previous technologies many times over. It could already be put into practice today, for example in the North Sea.

The innovative offshore platform can enable a number of tasks to be solved simultaneously. The proportion of “green” hydrogen (H2) in the energy mix can be increased on a CO2-neutral basis. In addition, the wide range of options for transporting H2 provide relief for the electricity transmission grid, the capacities of which are limited. Furthermore, H2 as an efficient energy storage medium can balance out seasonal fluctuations in renewable energy sources.

The role of Hydrogen (H2) is gaining importance in the energy mix, because it serves as an efficient form of storing energy and is easily transportable. Existing infrastructure can be used for the purpose. H2 is used to power gas turbines and fuel cells, can be used along with natural gas in private households and is also a key industrial raw material. It can be used as a CO2-neutral reducing agent to substitute coke in steel production.

In large-scale offshore wind farms Tractebel sees enormous potential for CO2-neutral production of “green” hydrogen. On the basis of the new type of platform model, the Tractebel team are currently working on a detailed solution for the use of the platform at an industrial scale (400 MW). It accommodates all the technical components required for production – including electrolysis units, transformers and desalinization plants.

The means of transport for the energy generated in this way, via pipeline or ship, are flexible. They provide alternatives to the contentious or overloaded cable lines – in the sea or over land. Compared to the costs of production of “grey” hydrogen from fossil sources, the costs for “green” hydrogen are currently somewhat higher.

Among other things a higher tax on CO2 emissions will ensure greater equality of opportunities here. The critical cost factor is the design of the system and the efficiency of the plants. The Tractebel concept includes the appropriate solutions for cost-optimized designs and efficient operation.

Tractebel is in a position to undertake all the engineering services for every stage of planning, from the feasibility study through to the detailed design. Moreover, as part of the Engie Group, the company is in a perfect position to deliver and operate offshore H2 platforms as an EPC supplier and to offer solutions for large-scale storage.