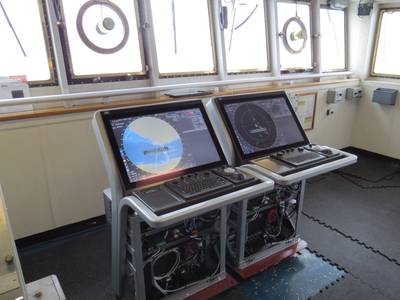 Radio Holland, part of the newly formed company RH Marine Group, has recently completed the installation of new radar and ECDIS equipment on the bridge of TS Golden Bear, the training ship of the California Maritime Academy.

Radio Holland was awarded an initial contract from The United States Maritime Administration (MARAD) in March for replacing the gyroscopes and gyrocompass repeaters. Radio Holland then successfully tendered for a second MARAD contract for the radars and ECDIS in June.

James Stones, Regional Manager Radio Holland USA Inc., said, “The project was carried out in two parts while the Golden Bear was on deployment. The project and the acceptance procedure from the US Coastguard and California Maritime Academy went smoothly. The Academy is also very much a trailblazer and sets the standards for the US training vessels.

Our local engineers based in Oakland and Long Beach, helped ensure the project could be completed swiftly, he said. “All of the radars and ECDIS were installed in three weeks and accepted within three weeks. This was over the Thanksgiving holiday.”

Captain Harry Bolton, USMS Commanding Officer of USTS Golden Bear and Director of Marine Programs at The California Maritime Academy, commented, “We are very excited to have the latest technology in radar and ECDIS on the bridge of the TS Golden Bear.

“This will allow our cadets to step on the bridge of any modern ship and be better prepared to operate these sophisticated navigation systems. We chose JRC as we felt the equipment was very intuitive, and it had the latest in ‘coherent’ radar technology. The Radio Holland team did a great job removing the old and installing the new equipment. We were impressed with their professional capabilities.”

Radio Holland will also provide training for the cadets on the vessel’s new systems and carry out the maintenance in the future.