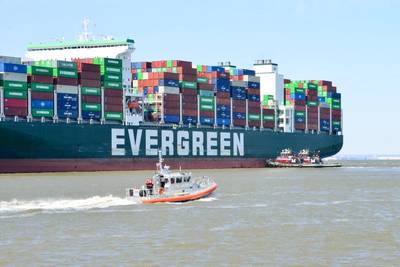 Evergreen Marine, the owner of a containership stuck aground in the Chesapeake Bay, has declared general average after two failed attempts to refloat the vessel.

The Ever Forward has been stuck near the Port of Baltimore since March 13 despite the efforts of dredgers and salvors who have been working for more than a week to dig out and refloat the 1,095-foot vessel. Separate attempts to refloat the ship on Tuesday and Wednesday were unsuccessful, meaning costlier and more complex salvage efforts will be required, Evergreen said.

"In light of the increasing costs arising from the continued attempts to refloat the vessel, Evergreen declared general average," the Taiwanese shipping company said in a statement on Thursday. "The complexity of further rescue operations will require more manpower, equipment and costs to refloat the stranded vessel as soon as possible."

General average is principle of maritime law requiring cargo owners to share with the shipowner or charterer the costs associated with rescuing a vessel in a casualty event.

Evergreen, which also declared general average last year following the Ever Given grounding in the Suez Canal, said it has nominated Richards Hogg Lindley as the general average adjuster for the Ever Forward. The company is urging cargo interests and joint venture slot users to provide security bonds and necessary documents in order to take delivery of cargo after the vessel is freed and arrives at its future ports of discharge.

The 12,000 TEU Ever Forward ran aground outside of the Craighill Channel after leaving Baltimore on the evening of March 13. The cause of the incident is under investigation.

On March 20, two clamshell dredges began digging out around the Ever Forward, and on March 29 five tugboats made the first attempt to move the stricken box ship. The next day, a second attempt by six tugs also proved unsuccessful.

The sitting vessel is not blocking vessel traffic, and there have been no reports of injuries or damage to the ship or its cargo, nor indication of fuel leakage or pollution. The Hong Kong-registered vessel is carrying 4,964 containers of general dry goods, according to the U.S. Coast Guard.