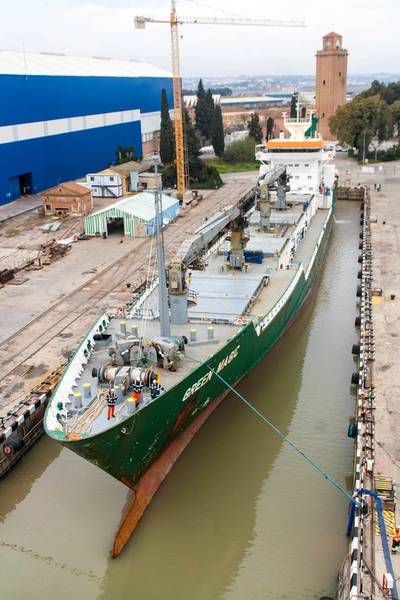 Guadalquivir Shipyards in Spain has announced that it has undertaken two repairs  at the dry dock of the Seville shipyard last month.

The Nassau-flagged reefer ship Green Magic (built in 1990, 135.7 meters in length, 16.33 meters in beam, gross tonnage of 5,103 tons) was required to have her propeller replaced with a new one. She left after three days, said a press release from the company.

Cyprus-flagged Vronskiy, a veteran ferry built in 1978 and operated by the Spanish shipping company Trasmediterránea, arrived on February 25. She usually covers the route between the ports of Motril and Nador (Morocco) or Almeria and Algeciras with some cities of the Maghreb. 131.6 meters in length by 22 meters in beam, she is one of the largest vessels that can access the dry dock. She has a gross tonnage of 13,505 tons and a 5.1 meter caliper.

This is the third time she has visited the facilities of the port of Seville, having also visited in 2016 and 2017. The vessel had been without a technical stop for two years, which increased her stay in the dry dock for greater and more intense maintenance work. This new visit confirms the trust this great Spanish shipping company has in the young factory of the Guadalquivir.

As usual, the vessel will be subject to blasting, fairing, painting and machine maintenance, among others. This is expected to take approximately two weeks.

New orders have already been confirmed for the month of March, the release added.