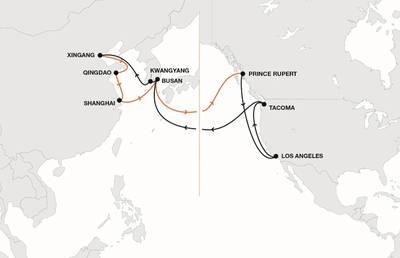 Hapag-Lloyd, the market leader in Canada, is expanding its local network. On April 21, the “YM Masculinity” called at a new destination, the Port of Prince Rupert, for the first time. The ship, which operates on the ‘PS8’ service of THE Alliance, was sailing from Asia to North America offering leading transit times and new options for customers.

“With the decision to incorporate Prince Rupert into our network, we strengthen and further expand our position in Canada,” explained Uffe Ostergaard, President of Hapag-Lloyd America. “Prince Rupert is the closest major North American port to Asia with direct access to CN’s Class 1 continental rail network. In this way, we can offer our customers additional options for their transports. We expect that the port call will develop well and offer our customers a genuine alternative.”
There has been a strong interest from the market for the first eastbound sailing including many containers with furniture, machine parts and computers. In Prince Rupert, it will mainly be loaded with forest products and agricultural goods for different Asian markets.
The port offers short transit times to other destinations in Canada and USA. For example, transports take only three days to Calgary and only five days to Montreal. In 2017, Prince Rupert increased its handling volume by 26 percent over 2016 volumes.
With a fleet of 219 modern container ships and a total transport capacity of 1.6 million TEU, Hapag-Lloyd is one of the world's leading liner shipping companies. The Company has around 12,500 employees and over 380 offices in 125 countries.
Hapag-Lloyd has a container capacity of 2.3 million TEU – including one of the largest and most modern fleets of reefer containers. A total of 120 liner services worldwide ensure fast and reliable connections between more than 600 ports on all the continents. Hapag-Lloyd is one of the leading operators in the Transatlantic, Middle East, Latin America and Intra-America trades.