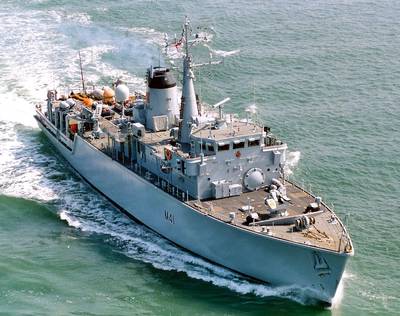 "On behalf of the Lithuanian Government, the Defence Equipment Sales Authority (DESA) awarded the contract that will see HMS Quorn renovated and restored, bolstering NATO maritime capability in Europe," the UK Ministry of Defence said Thursday.

"Supporting ambitions to bolster British shipbuilding, laid out in the National Shipbuilding Strategy Refresh, the regeneration will support 100 jobs at the south-west shipyard. The work will see an influx of contractors for the project across the local and national supply chain, with 14 major subcontract packages in engineering, equipment and integration, along with other refurbishment services," the ministry said.

Minister for Defence Procurement, Jeremy Quin, said: I’m pleased that this multi-million-pound contract will see a former Royal Navy mine-hunting vessel restored and regenerated in a British shipyard, supporting UK jobs and strengthening shipbuilding in the south-west. Lithuania is a key NATO ally and Joint Expeditionary Force partner, and this mine-hunting vessel will bolster NATO maritime capability across Europe, ensuring the Alliance remains ready to respond to evolving global threats.

HMS Quorn completed 27 years of service with the Royal Navy before being sold to Lithuania in April 2020.

The vessel patrolled the seas as part of the Royal Navy fleet of Hunt Class Mine Countermeasures Vessels (MCMVs) until 2017. The Hunt Class vessels specialize in active mine-hunting. They use high-definition sonar to scour seabeds for mines, which are then destroyed by the ship’s clearance diving teams or mine disposal system.

"A key NATO ally and partner in the Joint Expeditionary Force (JEF), Lithuania will add the restored mine-hunting vessel to its existing fleet, with the addition of this capability boosting NATO capability across Europe," the UK Ministry of Defence said.

Harland & Wolff's work on the ship includes upgrades to the ship's mission and sonar systems, and an additional search and rescue capability.

Cdre Richard Whalley, Head of DESA, said: "This contract award reinforces our excellent working relationship that we have with Lithuania as our NATO ally as well as UK owned Harland & Wolff. We’re really pleased to see HMS Quorn refurbished in Appledore Shipyard and look forward to continuing our work with them supporting the British supply chain. It is planned that the ship will be handed over to the Lithuanian Navy in 2024. HMS Quorn is the third mine-hunting vessel that DESA has sold to Lithuania, following the sale of HMS Dulverton and HMS Cottesmore in 2008.

John Wood, Group CEO of Harland & Wolff said: “I am thrilled that we have been awarded the M55 Contract. This is a watershed moment.
This contract has provided the breakthrough that we needed to activate the fifth and final element of our business strategy – the key market of Defence. Our strategy has been well and truly validated, and we intend to capitalize on this win through bidding on and securing further government contracts.

The extended process to win the M55 Contract enabled us to showcase the technical and commercial capabilities of the entire group and has now provided the MOD with a credible alternative to the existing industry base. This contract is validation that the Government can go elsewhere, recognizing the investment and progress made over the last two years to put Harland & Wolff in a position to execute on such programs. Our eyes are now set on delivering this contract and executing on our pipeline as we continue to build momentum, credibility, and a high-performing, experienced workforce.

Finally, I wish to thank the MOD for the faith that they have placed in Harland & Wolff, and I look forward to working closely with them on the successful delivery of this contract.”

Worth noting, Harland & Wolff, a shipyard that built the Titanic, last month said it had acquired the former HMS Atherstone mine hunter from the UK Ministry of Defence (MOD) for an undisclosed fee. The company, which was at the time involved in a competition run by the MOD regeneration program for the former HMS Quorn (M55), said that it believed that the acquisition of the former HMS Atherstone would significantly de-risk the M55 regeneration program given that the two vessels share a number of spare parts and components..