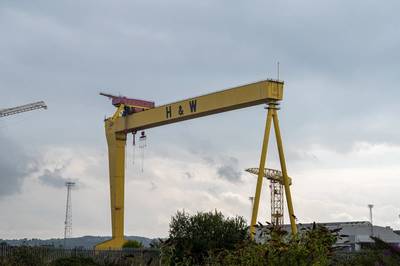 The historic Belfast shipyard Harland & Wolff announced it has secured its first newbuild order since being bought out of administration in 2019.

The shipyard, best known for having built the Titanic, is returning to action after being purchased by London-based InfraStrata. The yard said on Wednesday that it was awarded an initial contract worth approximately £8.5 million to build 11 barges for U.K.-based waste management and recycling company Cory, setting in motion the yard's first new shipbuilding project in nearly two decades.

Harland & Wolff said it will build the barges at its Belfast site, with first steel set to be cut within approximately eight weeks’ time.

The fully fabricated barges will be delivered to Cory for the transport of London’s recyclable and non-recyclable waste on the River Thames.

Harland & Wolff group CEO John Wood, said, “With this material contract, we shall be opening up our vast undercover fabrication halls in Belfast and making optimal use of our new robotic welding panel line."

“This contract gives us the opportunity to optimize our production flows in readiness for other fabrication programs in our pipeline and it demonstrates the variety of fabrication work that our facilities are ideally placed to execute upon.

“I am delighted to have secured this contract with our new client, Cory Group, and look forward to working very closely with them to deliver on their new barge investment program going forward.”

HMS Atherstone
In a separate announcement on Wednesday, Harland & Wolff also revealed it has acquired the former HMS Atherstone from the U.K. Ministry of Defense (MOD). The yard said it intends to convert the out-of-service mine-hunting vessel for non-military uses, discussions for which have already commenced with interested parties.

Harland & Wolff, which has primarily been focused on overhaul, refit and repair work, is also competing for the MOD regeneration program for another decommissioned mine-hunter, HMS Quorn (M55), and said it believes the HMS Atherstone acquisition helps to de-risk the M55 regeneration program given that the two vessels share a number of spare parts and components.

“We now can significantly de-risk the M55 regeneration program by utilizing spares and component parts common to the two vessels, which has been recognized by MOD and will certainly help in closing out the negotiations over the next few weeks,” Wood said.

“We also can utilize this platform as the basis for other clients’ projects, which will be a valuable revenue stream for 2023.”