Icebergs across the North Atlantic 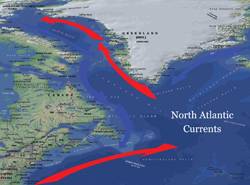 From the first voyages across the North Atlantic, icebergs have been a major threat to shipping interests. The most famous disaster was the sinking of the RMS Titanic on April 15, 1912. On her maiden voyage from Southampton to New York, the vessel struck an iceberg approximately 400 nautical miles south of Newfoundland, Canada. Less than 3 hours later the Titanic sank beneath the surface, taking with her over 1500 passengers (http://www.titanicuniverse.com/).

There were many other ship-iceberg accidents before the Titanic. On April 14, 1897, the French Brigt Vaillant collided with an iceberg near St. Pierre (French territory south of Newfoundland). Seventy-eight lives were lost with only four survivors who were picked up seven days later (Hill, 2005). On February 19, 1893, the SS Naronic struck an iceberg in a snowstorm across the Grand Banks, killing all 74 people onboard (Hill, 2005). More recently, on March 18, 2000, the Shrimp Trawler BCM Atlantic sank approximately 240 km east of Goose Bay, Labrador. The vessel struck a bergy bit (small iceberg) while in heavy snow. Everyone on the vessel was rescued safely (Hill, 2005).

However, it was the sinking of the Titanic that spurred the global marine community to create an iceberg patrol. The first ice patrol was sent by the United States Coast Guard in 1913 utilizing two Cutters. From then on, the International Ice Patrol (IIP) has been providing prudent iceberg information to vessels transiting the North Atlantic shipping lanes.

An iceberg is a large piece of ice that has broken away (or calved) from a glacier and is at least 5m above sea level. Icebergs are categorized by size from very large (over 75 meters high and 200 meters wide) to growler (less than 1 meter high and less than 5 meters wide). Approximately one-tenth of an iceberg’s mass is above the surface. Icebergs are usually 20% to 30% longer under water than above and twice as deep as they are long at the waterline (mollybawn.com/icebergs.html). About 90% of icebergs found near Newfoundland and the Grand Banks come from the glaciers of western Greenland. The remaining 10% come from the East Greenland glaciers and the ice shelves of northern Ellesmere Island (International Ice Patrol). By the time an iceberg reaches the Grand Banks, it has already lost approximately 85% of its’ original mass. After being calved off the glaciers of western Greenland, icebergs are transported 1800 nautical miles over a 2-3 year period along the Baffin Island and Labrador currents before reaching the Grand Banks of Newfoundland. Once the icebergs reach the waters of the Gulf Stream, they melt rapidly. Occasionally an iceberg can be transported across the Gulf Stream waters in cold water eddies with minimal melting, though this is fairly rare.

Iceberg season for the North Atlantic:

Across the Grand Banks, the most active months of the iceberg season (from March to May) create the most problems for shipping lanes across the North Atlantic. During a typical season, icebergs can migrate as far south as 39N across the Grand Banks. The farthest south an iceberg has been spotted was in 1926 near 30-20N/62-32W, approximately 150nm northeast of Bermuda. Vessels typically maintain at least 30 to 60 nautical miles safe berth south of the limit of all known icebergs as issued by the IIP, which usually means additional distance steamed for trans-Atlantic vessels proceeding to Newfoundland, Nova Scotia, and New England.

The International Ice Patrol (IIP) monitors the shipping lanes of the North Atlantic near the Grand Banks for icebergs year round. During the iceberg season, which generally runs from February 15 to June 01, iceberg advisories and charts are issued by the IIP. These advisories delineate the southern limit of all known icebergs and show the icebergs’ location and density. This information can be accessed by going to the IIP’s website at www.uscg-iip.org. In the summer and fall months, when icebergs are usually north of 50N, the Canada Sea Ice Patrol (http://ice-glaces.ec.gc.ca) provides daily bulletins on the latest iceberg limits.

Before the sinking of the RMS Titanic, the detection of icebergs was not an exact science. If a master saw an iceberg, he would report the date, time, and location and submit the information to the Hydrographic Office. The Hydrographic Office (during the iceberg season) would produce weekly charts of iceberg locations and climatological tracks. Of course the coordinates of the icebergs were not exact in the early 1900s as ships used celestial navigation to estimate their location. Also, currents and winds cause the icebergs to move on a daily basis, which creates large discrepancies in their location.

In 1912, after the sinking of the RMS Titanic, the US Navy initially patrolled the North Atlantic for icebergs before the Coast Guard and the IIP replaced them in 1913 (Carlson, 2006). In 1943, the first trained ice observers were sent on an aircraft to detect icebergs. Shortly after that, in 1945, radar was also used in experiments to detect floating ice. In 1995, RADARSAT-1, Canada’s first earth observation satellite was launched. The satellite images created by RADARSAT-1 are used to detect white spots along the ocean surface (these are known as radar targets). If a radar target is inconclusive, the IIP investigates further by flying over the coordinates of the given target to confirm if it is an iceberg or not. RADARSAT-2 was launched in December 2007 and has the capability to acquire better iceberg images with ultra-fine spatial resolutions (J.J. van der Sanden, 2004). Reconnaissance flights are still made on the average of five days every two weeks to confirm the southern limit of the iceberg area and to track individual icebergs (IIP).

Safely navigating ships away from icebergs:

Vessels typically maintain at least 30 to 60 nautical miles safe berth south of the iceberg limit issued by the IIP. This means added distance and extra fuel consumed. During the peak of iceberg season, vessels must navigate south of the typical shortest routes, passing south of the icebergs, which typically reach as far south as 39N. The added distance means added cost to owners or charterers due to additional steaming time and more bunkers consumed, though this is a small price to pay compared to striking an iceberg and severely damaging or sinking the vessel.

However, vessels do travel through the iceberg limits at times. Icebergs are known to be located in groups (due to prevailing currents and winds as they break-up). Frequently there are broad areas within the iceberg limits where there are no known icebergs. Vessels have been known to transit across this area cautiously, however weather conditions must be ideal for this to occur. Especially in the spring and early summer, low visibilities due to fog frequently occur across the Grand Banks (fog across the vicinity caused by the interaction between the cold Labrador current and the warm Gulf Stream). Vessels will not risk traveling through the iceberg limits in these conditions, as visual detection would be extremely limited.

Icebergs remain a major threat to shipping lanes across the North Atlantic. However, since the sinking of the RMS Titanic, there has been better detection and monitoring of icebergs thanks to the IIP and continuing advances in radar and satellite technology. With RADARSAT-2 in place, smaller icebergs are now being detected. These tools helps the IIP produce better iceberg warnings, which in turn allows for increased vessel safely while minimizing extra distance steamed and fuel consumed. Despite the improvements in technology that monitors and detects icebergs, vessels must continue to use extreme caution during the iceberg season when navigating near the Grand Banks.

Joshua J. Kearns – Marine Meteorologist at Weather Routing, Inc. Glens Falls, NY. Route Analyst and Forecaster for commercial ships and private yachts around the world. Graduated with B.S. in Meteorology from Lyndon State College. Joshua or Weather Routing, Inc. (WRI) can be contacted via email at [email protected] or phone at (518)-798-1110.