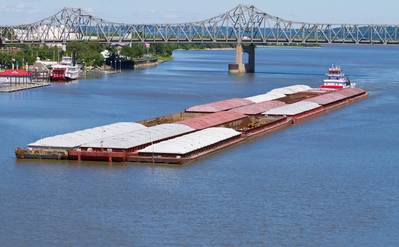 The Ohio River was closed to commercial navigation on Monday near Brookport, Illinois, after a hydraulic system used to open and close lock gates at lock and dam 53 failed, the Waterways Council said.
A queue of more than 65 towboats was waiting to pass through the area on Monday morning, the group said in a news release.
The closure was the latest headache for shippers scrambling to haul newly harvested soybeans from Midwest farms to export terminals along the Gulf Coast.
U.S. barge freight rates have soared to new highs as low water on the Mississippi River hindered navigation and appeared to cause several vessel groundings over the weekend, traders and barge brokers said.
Barges in the Memphis to Cairo, Illinois, market traded as high as 1,100 percent of basic tariff over the weekend, up 200 points from trades on Friday and near all-time highs for the market set in September 2014, brokers said. Barges delivered to some river elevators south of Memphis traded at 1,300 percent or more, they said.
The Mississippi River and its tributaries are a key pipeline for moving grain to export markets. Around 60 percent of all U.S. corn, soybean and wheat exports exit the country via the Gulf Coast.
The shipping woes come as U.S. farmers are ramping up the harvest of bumper corn and soybean crops and exporters are scrambling to secure more soybeans to meet shipping commitments.
The corn harvest is expected to be about 21 percent complete while the soy crop is around 25 percent harvested, according to analysts polled by Reuters.
As supplies are moving to market, elevators are prioritizing loading of soybean barges while storing corn, but storage space is quickly filling up, traders and barge brokers said.
"People are running out of space. Everybody's been stuffing their bin space with corn and shipping beans. Now they can't find enough barges when they need them to move the beans," said a barge broker who asked not to be named.


(Reporting by Karl Plume in Chicago; Editing by Chizu Nomiyama and James Dalgleish)