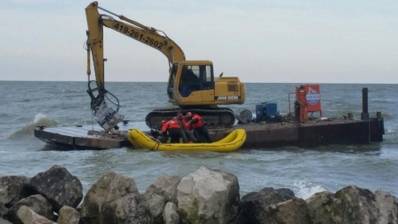 The U.S. Coast Guard medically evacuated a man off of a dredging barge in Lake Erie near Sandusky, Ohio, Wednesday evening.
At approximately 5:45 p.m., a good Samaritan called Coast Guard Station Marblehead, Ohio, to report two men on a dredging barge who needed help due to injuries.
The barge was 50 yards off shore in water too shallow for a Coast Guard response boat to get to come alongside, so a rescue team traveled to the location by truck. The rescue team launched from the shore in a skiff ice inflatable boat, normally used for ice rescue, and brought one man back to awaiting emergency medical services.
The other man said he wished to stay aboard the barge and waited for a commercial salvage company, which towed the barge to Johnson Island in Lake Erie.