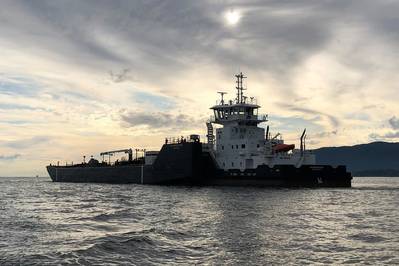 The West Coast's largest bulk transporter of refined petroleum products said that the vessel was christened June 20th at Island Tug’s facility in Burrard Inlet and is the second of two, twin Z-drive, ATB push tugs for service on the West Coast of North America.

Constructed at Island Tug’s Annacis Island Shipyard in British Columbia and completed by Nichols Brothers Boat Builders in Washington State, the Island Regent is connected by an articulating pin system to the ITB Reliant which was retrofitted with pin ladders and stern extensions for connecting to the new tug.

Island Tug had a well-defined statement of requirements for the vessels and a clear vision of the desired layout and accordingly the design was developed in close collaboration with the owners.

Partway through construction, Island Tug was acquired by Vancouver, Washington based Tidewater Transportation and Terminals, with completion of the vessel falling under the direction of Tidewater’s engineering department.

With the twin Z-drives on the tug, and the remote operated 360-degree bow thruster on the barge, the combined ATB unit has exceptional maneuverability. The ATB pushing arrangement brings with it substantially higher fuel efficiency and significantly increased speeds over conventional towing.

The Island Regent / ITB Reliant and Island Raider / ITB Resolution ATB units set a new standard for crew comfort and significantly enhance the level of safety and efficiency of the transport of refined petroleum products on the coast of British Columbia.