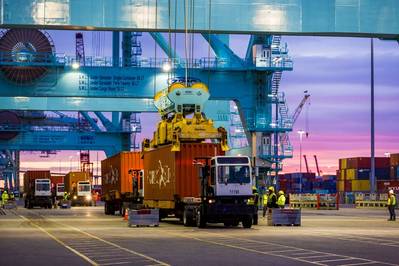 Cargo activity through Jacksonville’s seaport positively impacts tens of thousands of jobs and supports nearly $31.1 billion in annual economic output for the region and state, according to a newly released study. The study, citing double-digit growth in the port’s total economic impact over the last five years, was conducted by Martin Associates, a widely recognized maritime research firm.

In the Jacksonville area, the study concludes that 26,282 people are employed in port-dependent positions—direct, indirect and induced jobs relying on the port. This figure represents a nearly 8 percent increase over a previous study conducted in 2013. The port’s total economic value of $31.1 billion has also increased 15 percent during this time. In addition, the study finds that 138,500 jobs across the state of Florida are related to cargo moving through Jacksonville’s port.

Port-dependent jobs pay an average annual salary of $70,570, well above the state of Florida average salary for all occupations of $46,010.

The port achieved significant Asian volume increases following the 2017 decision by the JAXPORT Board of Directors to begin construction on the project to deepen the Jacksonville shipping channel to 47 ft. The report finds that this steady volume growth underscores the importance of harbor deepening, which will allow JAXPORT to accommodate more cargo aboard the increasingly larger ships calling Jacksonville. The project is ahead of schedule and expected to be complete in 2023, based on continued funding from all partners.

A previous study conducted by Martin Associates in 2014 projected that JAXPORT’s Asian container business would generate 5,675 direct, indirect and induced jobs by the year 2020. The new study finds the actual number of these jobs in 2018 has already reached 5,538, a difference of about 2 percent from the forecast for 2020.

The report also finds that every 1,000 vehicles that move through the port supports 1.6 direct local jobs. JAXPORT is the nation’s second largest vehicle-handling port, moving more than 665,000 units last year.

“The successes we are experiencing throughout all of our lines of business have a direct and lasting impact on our region and state,” said JAXPORT CEO Eric Green. “The more we continue to invest in this port and grow our reputation as a global gateway into the Southeast U.S., the more jobs we create for our neighbors and the more revenue we put back into our area’s economy.”