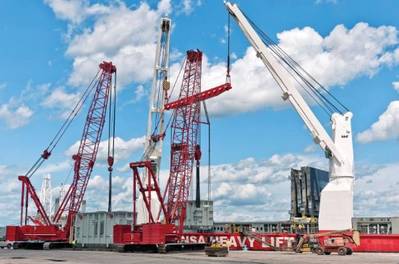 Seaway notice 9 addresses maximum allowable drafts in Lake Ontario’s Montreal section, stating the maximum allowable draft is increased to 80.8 dm (26' 06"), subject to favorable water elevations, effective April 14, 2014. This increase applies to all vessels. In addition, there will be zero tolerance for ship's draft in excess of 80.8 dm (26' 6"). Speeds will be monitored carefully between St. Lambert Lock and St. Nicolas Island for ships loaded to a draft greater than 80.0 dm (26' 3").

Seaway notices address issues specific to a given navigation season, and serve to complement the regulations found in the Seaway Handbook. The notices (which take the form of general Seaway notices applicable to the entire St. Lawrence Seaway, and regional notices which may be applicable to the Montreal / Lake Ontario region or to the Welland Canal) are disseminated via e-mail broadcasts to subscribers.