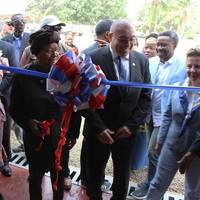 The Liberia Maritime Training Institute (LMTI) was officially opened by Liberia President Ellen Johnson-Sirleaf during an inauguration ceremony in Marshall City, Liberia, on January 5. The facility is named after John G Bestman, former Liberian finance minister and a member of the board of governors of the Central Bank of Liberia. Under the management of the Liberian International Ship & Corporate Registry (LISCR), LMTI has undergone a massive renovation and facility modernization program over the past two years, resulting in the creation of a new campus and state-of-the-art facilities. 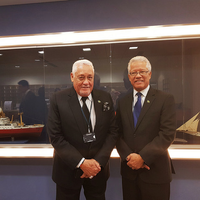 Jamaica has reestablished its position at the heart of international maritime rule-making following its election to the International Maritime Organization's (IMO) Council. The nation was elected as a Category C Council member on December 1, and will serve until 2019. The Maritime Authority of Jamaica’s (MAJ) Director General, Rear Admiral Peter Brady previously chaired the former IMO’s Standards of Training and Watchkeeping (STW) sub-committee between 2003 and 2012, now called the Human Resource Training and Watchkeeping Sub Committee. 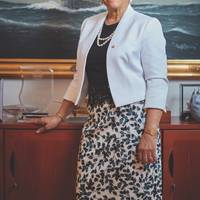 To say that Dr. Cleopatra Doumbia-Henry is passionate about all matters surrounding maritime and seafarers is a bit of an understatement. Prior to taking the helm as president of the World Maritime University (WMU) two years ago, she served as the Director of the International Labor Standards Department of the International Labor Office (ILO) in Geneva, Switzerland, responsible for developing the Maritime Labor Convention, 2006. Maritime Reporter & Engineering News was at WMU…

Jamaican Elected to WMU Board

Maritime Authority of Jamaica’s (MAJ) Director General Rear Admiral Peter Brady has been elected as the Vice Chairman of the Board of Governors of the World Maritime University (WMU) in Malmo, Sweden. The appointment has been welcomed by Jamaica’s maritime community as recognition for the MAJ’s focus on training and the Admiral’s crucial role within the international shipping sector. served as a visiting lecturer between 2003 and 2004. He has been a serving member on the WMU Board of Governors since 2007.

Senate bill aims to mitigate impact of labor disputes at America’s ports. In a letter sent today, the Retail Industry Leaders Association (RILA) welcomed the introduction of the Protecting Orderly and Responsible Transit of Shipments (PORTS) Act in the U.S Senate. The bill, sponsored by Senator Cory Gardner (R-CO), would amend the National Labor Relations Act (NLRA) to provide state governors a mechanism under federal law to mitigate the destructive impact of port labor disputes on the economy at both the state and federal level. Specifically, the legislation would authorize a governor from a state where a port labor dispute is causing economic harm to form a board of inquiry and start the Taft Hartley process. 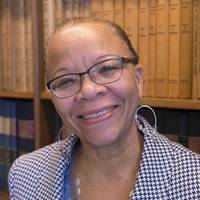 Huntington Ingalls Industries (HII) announces its sponsorship of the annual USO Gala, which will take place tonight at the Washington Hilton in Washington, D.C. HII's sponsorship will help enable the USO to continue its mission of lifting the spirits of troops and their families through the many programs the organization delivers to services members, their families and wounded warriors. "We are proud to sponsor the USO and help in any way possible to support its important mission," said HII President and CEO Mike Petters. "The USO does so much to improve the lives of our service men and women and their families around the world. This year the USO celebrates its 73rd anniversary.

BP today announced the appointment of Spencer Dale as its new Group Chief Economist with effect from the end of October. Mr Dale joins BP from the Bank of England where he is currently Executive Director for Financial Stability Strategy and Risk. He is also a member of the Bank’s Financial Policy Committee. In his previous capacity as the Bank’s Chief Economist, Mr Dale served for six years on the Monetary Policy Committee. Since joining the Bank in 1989, Mr Dale’s roles included working as private secretary to former Governor Mervyn King and a secondment as a visiting Senior Adviser in the Division of Monetary Affairs at the Board of Governors of the Federal Reserve System in the United States. 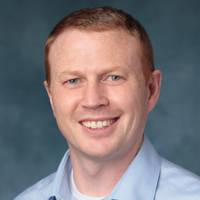 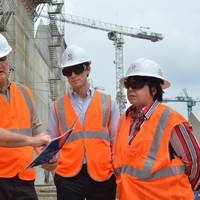 President of Inter-American Development Bank (IDB), Luis Alberto Moreno, visits the construction site of the new locks in Colon province. The new locks, situated on the Atlantic side, were visited by Moreno, accompanied by IDB delegates, who are in Panama to participate in the Fifty-Fourth Annual Meeting of the Board of Governors which takes place from March 14 to 17, 2013. During the visit, Panama Canal Administrator Jorge Luis Quijano presented an update on the progress of the Expansion Program. 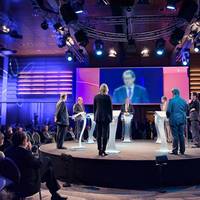 Nor-Shipping 2013 opens just three months from now with a cast of speakers featuring top executives from world-leading companies covering the entire value chain of themaritime industry – from shipowners and technology and service companies to regulators and financiers. Among speakers welcoming delegates to the Opening Conference on June 4 will be Norway’s Minister of Trade and Industry Trond Giske, who will provide a governmental perspective, and IMO Secretary-General Koji Sekimizu, who will share regulatory insights.HRH Crown Prince Haakon of Norway will also attend.

The American Society of Safety Engineers’ (ASSE) Women in Safety Engineering (WISE) Common Interest Group has honored  100 women from around the world for making a difference in the safety, health and environmental (SH&E) field as part of the WISE ‘100 Women, Making a Difference in Safety’ project. Mary Armstrong, who is based in the Seattle area, was honored for her dedication to protecting people, property and the environment. Armstrong is the vice president of Environment, Health and Safety at Boeing, the world’s largest aerospace company. She joined the company in 1984 as a process engineer for manufacturing research and development, and steadily ascended the chain of command during the last two decades.

The Board of Governors of the Connecticut Maritime Association (CMA) and organizers of the popular CMA Shipping maritime conference and exhibition have announced the dates for the Shipping 2004 event: March 22, 23 and 24, 2004. opportunities. focused on doing business. members of the industry for members of the industry. all work with. and, while here, to be able to do business. business in the United States. world. networking environment.

Gordon England Sworn in as 73rd Secretary of The Navy

The Honorable Gordon R. England, right, receives the oath of office during a short swearing in ceremony as the 73rd Secretary of the Navy. Administering the oath is Mr. John H. La Raia, Assistant for Administration to the Under Secretary of the Navy. Secretary England becomes only the second person in history to serve twice as the leader of the Navy Marine Corps Team and the first to serve in back to back terms. U.S. Navy photo by Chief Journalist Craig P. Strawser. England becomes…

A&B and Matson Chairman Passes Away at Age 83

“Old sailors never die, they just drop the anchor,” Robert J. “Bobby” Pfeiffer said over a decade ago as he was contemplating retirement. Pfeiffer, one of Hawaii’s most renowned sailors and captains of industry, dropped the anchor on Friday, September 26, 2003, at age 83, at his home in Orinda, Calif., after a lengthy illness. During his 12 1/2 years at the helm of Alexander & Baldwin, Inc., Pfeiffer became practically synonymous with business leadership in Hawaii. He charted a course of modernization and diversification, and led A&B through one of its strongest periods of growth and prosperity. At the same time he earned a reputation for leadership –– personal as well as corporate –– in support of charitable and other community causes.

The Board of Directors of Chemoil Energy announced that the company’s CEO and Executive Chairman, Robert V Chandran passed away January 7, 2008 from injuries sustained when a helicopter he was traveling in crashed in the Riau Province of Indonesia. In the aircraft with Chandran was Terence Gidlow, Chemoil’s Vice President of Business Development, who was injured but is in stable condition. Chandran built Chemoil Energy into one of the world’s leading independent suppliers of marine fuels since he founded the company in 1981.

Jersey at a industry-wide luncheon on April 10, 2008. Longshoremen's Association (ILA). He is a co-founder of the Maritime Stakeholders Group (MSG), a group that represents labor, management and other affiliated maritime businesses that promotes the maritime interests in the Delaware River Region in preserving maritime land for maritime use instead of residential and other commercial uses. An active member in the Philadelphia Maritime Community, Uwe has served as President of the Board of Governors of the Philadelphia Maritime Society, Board of Directors of the Maritime Exchange, Seamen's Church Institute and Chilean/American Chamber of Commerce and as a Trustee of the PMTA-ILA Funds. 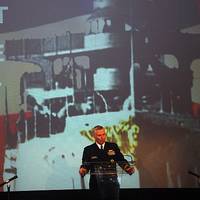 By Lt. The U.S. Navy commemorated the 100th anniversary of the Great White Fleet in Oct. 7 at Grand Central Terminal with the opening of an exhibit that will run through the 2008 Columbus Celebration ending Oct. 17. The exhibit - which includes eight-foot models of battleships, artifacts, memorabilia from Sailors aboard the ships and photo displays that tell the story of an American naval mission - highlights aid provided by ships of the Great White Fleet to in 1908 following a devastating earthquake.

The University of North Florida (UNF) Transportation & Logistics (T&L) Flagship Program recognized Tami Porter, Director, East Coast & Gulf Terminal Operations of Horizon Lines, LLC, as the recipient of the Impact Award for Community Partner. Ms. Porter was presented the honor at an awards ceremony on May 1 in Jacksonville, FL. Porter was recognized for her contributions to the UNF T&L Flagship Program, including her work evaluating industry case competitions and participating in panel discussions for students. She also arranged port and vessel tours at Jaxport and provided guidance and expertise for the 130 students involved in the program, according to Lynn Brown, Associate Director of UNF's T&L Flagship Program. 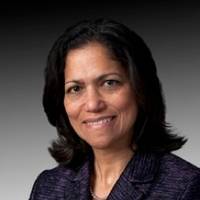 Alma Martinez Fallon, HII's Newport News Shipbuilding (NNS) director of supply chain procurement receives achievement award. Alma Martinez Fallon, director of supply chain procurement for the company's Newport News Shipbuilding (NNS) division, is a recipient of an Inside Business 2012 Women in Business Achievement Award. Fallon was presented with the award during a banquet held at the Norfolk Waterside Marriott. Women in Business Achievement Award recipients are selected by a panel of judges that reviews nominations from the public.