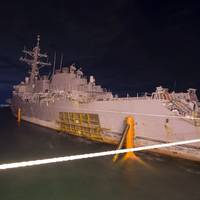 U.S. warship USS John S. McCain, which was involved in a collision with a cargo ship east of the Straits of Malacca and Singapore in August, has arrived at Fleet Activities Yokosuka for repair. The Arleigh Burke-class guided missile destroyer DDG 56 arrived in Tokyo Bay aboard heavy lift transport vessel MV Treasure on December 5, and arrived at Fleet Activities Yokosuka on December 13 following several days of preparations. The vessel will be repaired by U.S. Naval Ship Repair Facility-Japan Regional Maintenance Center in Yokosuka before returning to service in U.S. 7th Fleet. 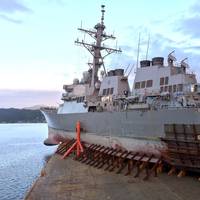 U.S. warship USS John S. McCain, which was involved in a collision with the merchant vessel east of the Straits of Malacca and Singapore in August, has departed Subic Bay, Philippines aboard heavy lift transport vessel MV Treasure en route to Fleet Activities Yokosuka for reapir. The Arleigh Burke-class guided missile destroyer USS John S. McCain (DDG 56) was diverted to Subic Bay October 22, due to poor weather conditions and to repair cracks in the ship's hull discovered after the ship departed Singapore aboard MV Treasure, the Navy said. 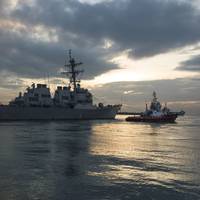 The guided missile destroyer USS John S. McCain (DDG 56) departed Changi Naval Base Oct. 5, to meet heavy lift transport vessel MV Treasure. Over the next few days, John S. McCain will be towed to deep water, where the heavy lift vessel will lower itself, secure the ship on a platform and then raise back up out of the water. After the process of loading the ship is complete, Treasure will transport John S. McCain to Fleet Activities Yokosuka, where the forward deployed ship will be repaired. 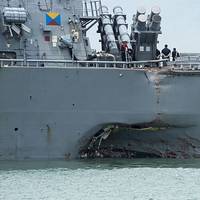 U.S Navy and Marine Corps divers have recovered and identified a second body in the search for ten sailors missing after a collision between a guided-missile destroyer and merchant vessel near Singapore earlier this week, the U.S. Navy said on Friday. The USS John S. McCain collided with the merchant tanker in waters near Singapore and Malaysia on Monday, which led to an international search-and-rescue operation for the missing sailors. The navy recovered the first body from inside the hull of the warship earlier this week.

The U.S. Navy on Wednesday said it had removed Seventh Fleet Commander Vice Admiral Joseph Aucoin after a series of collisions involving its warships in Asia as the search goes on for 10 sailors missing since the latest mishap. Aucoin's removal comes after a pre-dawn collision between a guided-missile destroyer and a merchant vessel east of Singapore and Malaysia on Monday, the fourth major incident in the U.S. Pacific Fleet this year. "Admiral Scott Swift, commander of U.S. Pacific Fleet…

U.S. Pacific Fleet Commander Admiral Scott Swift on Tuesday said divers have found human remains inside the USS John S. McCain, which collided with a merchant vessel this week. "The divers were able to locate some remains in those sealed compartments during their search today," Swift told reporters at Singapore's Changi Naval Base, where the damaged vessel is docked. Swift also said the U.S. Navy was working to identify a body found by the Malaysian navy to see if it was one of 10 missing U.S. sailors in the accident. The USS John S.

Amphibious assault ship USS America (LHA 6) arrived Aug. 21 at Changi Naval Base, Republic of Singapore and is moored across the pier from the guided-missile destroyer USS John S. McCain (DDG 56). While in Singapore, America will provide messing and berthing services to McCain crew members and to support damage control efforts on board. America will also support ongoing searches for 10 missing Sailors. Ship Repair Facility divers are on scene as well to assess the damage to the hull. 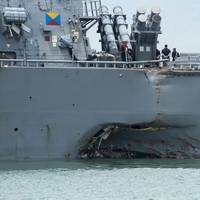 Ten U.S. sailors were missing after a collision between a destroyer and a tanker east of Singapore on Monday, the second involving a U.S. warship and a merchant ship in Asia in about two months, triggering a fleet-wide probe of operations and training. The guided-missile destroyer John S. McCain and the tanker Alnic MC collided while the warship was heading to Singapore for a routine port call. The collision tore a hole in the warship's waterline, flooding compartments that included a crew sleeping area, the U.S. Navy said in a statement. "Initial reports indicate John S.

The guided-missile destroyer USS John S. McCain (DDG 56) has arrived at Changi Naval Base following a collision with the merchant vessel Alnic MC while underway east of the Straits of Malacca and Singapore on Aug. 21. The collision was reported at 6:24 a.m. Japan Standard Time. Significant damage to the hull resulted in flooding to nearby compartments, including crew berthing, machinery, and communications rooms. Damage control efforts by the crew halted further flooding. There are currently 10 Sailors missing and five injured.

With an effort to consolidate the Navy-to-Navy cooperation and to strengthen the relationship in tune with India’s Act East policy, Chief of Naval Staff (CNS) Admiral RK Dhowan will be going on a five-day tour to Singapore and Thailand. Dhowan will be visiting Singapore from 20-22 July and Thailand from July 23-25. During the Singapore visit, Dhowan will meet various dignitaries, including that country’s defence minister, chief of defence forces and the Chief of Navy. He will…

The Republic of Singapore Navy (RSN) and the Royal Malaysian Navy (RMN) conducted a bilateral maritime exercise, reports Channel News Asia. The 12-day Exercise Malapura involved about 600 personnel from Singapore Navy and Malaysia. Both navies carried out joint planning and training at Changi Naval Base (CNB), and conducted drills in conventional naval warfare and maritime security in the Malacca Strait. The Defence Ministry said Singapore's frigate, a missile corvette, a patrol vessel and a naval helicopter were part of the exercise.

USS Fort Worth Arrives in US 7th Fleet 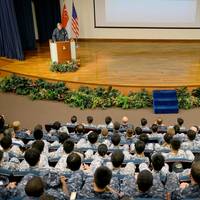 The 19th annual Cooperation Afloat Readiness and Training (CARAT) Singapore exercise commenced with an opening ceremony at Changi Naval Base, July 15. Continuing through July 26, CARAT Singapore 2013 consists of 12 days of shore-based and at-sea training events designed to address shared maritime security priorities, develop relationships, and enhance interoperability among participating forces. CARAT Singapore is part of a series of bilateral naval exercises between the U.S. Navy and the armed forces of nine partner nations in South and Southeast Asia.

Deputy Prime Minister Teo Chee Hean visited USS Freedom, July 12, while the ship was moored at Changi Naval Base. Mr. Teo, a former Republic of Singapore Chief of Navy, visited the U.S. Navy's first-of-class littoral combat ship as she prepares to participate in Cooperation Afloat Readiness and Training (CARAT) Singapore next week - an annual bilateral exercise with the Republic of Singapore Navy in its 19th year. Mr. Teo also serves as Singapore's Coordinating Minister for National Security and Minister for Home Affairs. 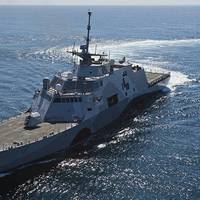 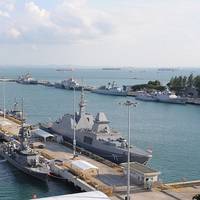 Fifteen warships from nine countries around the world, including the latest patrol vessels, frigates, corvettes and destroyers, sailed into Singapore for the Warships Display at IMDEX Asia 2013, taking place at Changi Exhibition Center from May 14-16, 2013.The U.S. Navy’s first ever littoral combat ship, USS Freedom, in its maiden overseas deployment, was among the warships at Changi Naval Base. The warships, from Australia, France, India, Indonesia, Republic of Korea, Malaysia, Singapore, Thailand and the U.S., will be berthed at Changi Naval Base throughout the event. 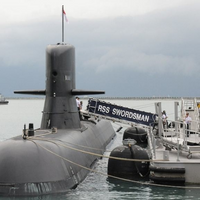 The Singapore Navy's second 'Archer-class' submarine 'RSS Swordsman'  returns to Singapore after upgrading. The Republic of Singapore Navy's (RSN)  Archer-class submarine, RSS Swordsman, has arrived at Changi Naval Base (CNB) from Sweden. Chief of Navy, Rear-Admiral Ng Chee Peng, and other senior naval officers were present at CNB to witness its return. Launched in Karlskrona, Sweden, on 20 October 2010, RSS Swordsman is one of two ex-Royal Swedish Navy Västergötland-class submarines that Singapore acquired in 2005.

Singapore POCC: Off with the Old, On with the New

Singapore's first Port Operations Control Room Centre (POCC) de-commissioned, as new upgraded centre takes over control. The decommissioning of the centre at at Tanjong Pagar Complex (POCC-TPC) marks the retirement of Singapore's first POCC after more than 28 years of faithful service in ensuring navigational safety of vessels in the Singapore Strait and Singapore's port waters. First commissioned on 1 May 1984, POCC-TPC initially used VHF radios to manage vessel traffic in Singapore until the first radar based Vessel Traffic Information System (VTIS) was installed in 1990.The VTIS allowed POCC officers to see the positions of vessels in real time on a screen and provide navigational assistance to these vessels.

U.S. aircraft carrier Kitty Hawk docked at Singapore's new deep-draft naval pier on Thursday, the first giant American warship to use the facility. The pier, at Singapore's Changi Naval Base, is one of only two in the region large enough to berth a carrier. The other is at Port Klang in Malaysia. The pier will help speed up re-supply of large warships and improve mission turnarounds, said Rear-Admiral Mark J. Edwards, who heads the Logistics Group, Western Pacific. "This is very important as our deployment schedules are ever-changing," Edwards said. Singapore, at the mouth of the Malacca Strait, was also a strategic location for the U.S. Navy, he said. Admiral Vern Clark, chief of U.S.

The fourth phase of the 13th annual Cooperation Afloat Readiness and Training (CARAT) exercise series began July 13 in an exercise that will include an estimated 1,500 military personnel, 13 ships, a submarine and the newly-commissioned Republic of Singapore Navy (RSN) frigate RSS Formidable (68). Members representing the combined armed services of both nations, dignitaries and local and national media gathered for the exercise's official kick off at the RSN’s Fleet Command Headquarters at Changi Naval Base. This year’s CARAT will maintain the tradition of previous CARATs with the primary focus on training that will enhance interoperability and professional cooperation between the armed forces of the United States and other participating nations.

According to the AP, Singapore is building a joint command center that will house three maritime groups under one roof to increase coordination against threats at sea, the Defense Ministry announced Wednesday. A groundbreaking ceremony was held Tuesday for the Changi Command and Control Center, which is expected to be operational in 2009 to coordinate local, regional and international security efforts to deal with threats such as piracy and terrorist attacks on ships. The center, to be located beside the Changi naval base, will house the Singapore Maritime Security Center, the Information Fusion Center and the Multinational Operations and Exercises Center. Singapore, Indonesia and Malaysia have in recent years coordinated maritime and air patrols in the Malacca Strait.

U.S. Navy and Republic of Singapore navy (RSN) sailors and officers shared their views on terrorism and maritime security during a seminar on the subjects May 31 at the RSN’s Changi Naval Base. The seminar included a presentation on the U.S. Navy’s 21st century maritime strategy by a visiting U.S. Naval War College (NWC) professor here in support of exercise Cooperation Afloat Readiness and Training (CARAT), a series of bilateral exercises held annually throughout Southeast Asia. “My visit is twofold. I hope we can have a dialogue so I learn from the experts who live in this region of the world,” said Jeffrey Norwitz, professor, National Security Decision Making at the NWC.