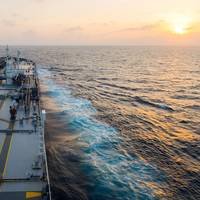 Brazil's state-controlled oil company Petroleo Brasileiro SA has ordered its ships to avoid the Strait of Hormuz, it said in a statement.Petrobras, as the company is known, says the decision, which was taken after consultations with Brazil's Navy, will not affect fuel supply in Brazil.(Reporting by Luciano Costa Editing by Chizu Nomiyama) 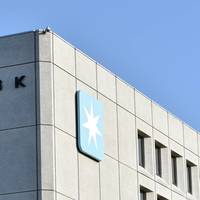 Brazilian authorities on Wednesday targeted Maersk and other companies for allegedly paying bribes to get an edge in securing shipping contracts with state oil firm Petroleo Brasileiro SA, in the latest phase of a sprawling graft probe.Federal prosecutors said in a statement that Denmark's Maersk, the world's largest shipping company, was involved in allegedly paying $3.4 million in bribes related to 11 shipping contracts with Petrobras, worth 592 million reais ($141.07 million).Maersk was not immediately able to comment when contacted by Reuters.

SHI to Pay $75m in Fine: US Justice Dept

South Korean shipbuilder Samsung Heavy Industries Co. (SHI) has agreed to pay $75 million in penalties to avoid prosecution in the United States over its scheme to pay millions of dollars in bribes to Brazilian officials to win a contract.“Samsung Heavy Industries paid millions of dollars to a Brazilian intermediary, knowing that some of that money would be used to bribe high-level executives at Petrobras and obtain a lucrative shipbuilding contract,” said Assistant Attorney General Brian A. Benczkowski of the Justice Department’s Criminal Division. 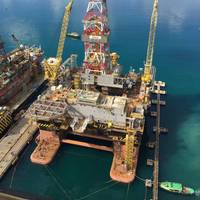 Singapore firms Keppel Corp and Sembcorp Marine said on Monday they had reached settlements with indebted Brazilian firm Sete Brasil over long-standing contracts to build drillships and rigs.Sete, which leased oil rigs to Brazil's state oil firm Petroleo Brasileiro SA (Petrobras), filed for bankruptcy protection in 2016 after being engulfed in a massive corruption scandal.Keppel and Sembcorp Marine are among a host of firms caught up in the wide-ranging "Car Wash" investigation. 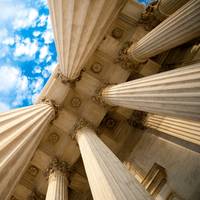 Brazil's top court on Thursday ordered state-run oil company Petroleo Brasileiro SA to refuel two Iranian grain vessels stranded on the Brazilian coast due to U.S. sanctions holding up sales of fuel needed for their return trips.Chief Justice Dias Toffoli overturned a lower court ruling that allowed Petrobras, as the oil major is known, to refrain from fueling the vessels.Petrobras had denied service, citing the risk of consequences from U.S. sanctions. However, the risk is reduced if it is simply obeying a Supreme Court ruling…

Iran Grain Ships Stranded in Brazil due to U.S. Sanctions

Two Iranian vessels have been stranded for weeks at Brazilian ports, unable to head back to Iran due to lack of fuel, which state-run oil firm Petrobras refuses to sell them due to sanctions imposed by the United States.The vessels Bavand and Termeh came to Brazil a couple months ago carrying urea, a petrochemical product used as fertilizer. They were expected to load corn and return to Iran, but lacked enough fuel for the trip, the port operator in Paranaguá told Reuters.Food is not covered by U.S. sanctions, and Iran is one of the largest buyers of Brazil's agricultural commodities, importing more than 2.5 million tonnes of Brazilian corn so far this year — more than any other country.However, that trade is not usually carried by ships flying the Iranian flag. 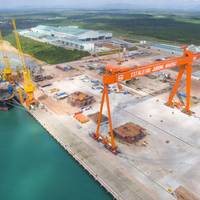 Singaporean rig builder Sembcorp Marine said on Wednesday that authorities had searched its shipyard in Brazil as part of a graft investigation, sending its shares lower and underlining the staying power of Brazil's ongoing "Car Wash" corruption probe.Sembcorp Marine said the search was related to investigations against former consultant Guilherme Esteves de Jesus, adding that Martin Cheah Kok Choon, the former president of the Estaleiro Jurong Aracruz shipyard, was also under investigation.In a separate statement…

Brazil auctioned off six port terminals for liquid fuels in the northern state of Para to private operators on Friday, with subsidiaries of state-run oil company Petroleo Brasileiro SA winning two of the areas.The government raised nearly 450 million reais ($117 million) in the auction of the terminals — five in the Miramar port in the city of Belem and one in the Vila do Conde port in the city of Barcarena.The rights to operate the terminals are the latest in a slew of assets Brazil is selling as part of its drive to shore up public finances and reduce a gaping budget deficit.In an auction broadcast online, Petrobras Distribuidora SA - also known as BR Distribuidora - won a 20-year lease on a terminal in the port of Miramar with a bid of 50 million reais ($12.94 million).Petrobras Transpo 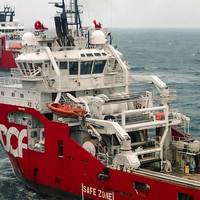 Norwegian supply shipping company DOF Subsea has been awarded contracts for three remotely operated (ROV) Support Vessels (RSV) with Petroleo Brasileiro S.A. (Petrobras).All contracts have a firm duration of three years and can be extended for another two years, informed the offshore support vessel owner.The vessels allocated for the contracts are Skandi Commander, Skandi Olympia and Skandi Chieftain, all owned by DOF Rederi AS (100 % owned by DOF ASA).Each vessel will be equipped with two state of the art work class ROVs owned and operated by DOF Subsea Group.

Brazilian federal prosecutors on Thursday charged 12 people in connection with an alleged bribery scheme meant to benefit the giant oil trader Vitol SA at the expense of Brazil's state-led oil firm Petroleo Brasileiro SA.Those charged include former Petrobras employees and middlemen who prosecutors allege worked directly with top executives at Vitol. Calls to Vitol's Rio de Janeiro office rang unanswered on Thursday. Last week the company told Reuters it would work with investigators, and that it had a zero-tolerance policy on corruption. (Reuters reporting by Brad Brooks; editing by Jonathan Oatis)

Petrobras, Murphy to Explore in GoM 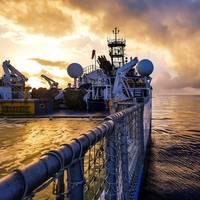 Brazil's state-controlled Petroleo Brasileiro SA (Petrobras) said on Monday it had sealed a joint venture with Murphy Exploration & Production Company to explore oil and gas fields in the Gulf of Mexico, according to a securities filing.Petrobras received $795 million for the deal, and will have a 20 percent stake in the venture.Reporting by Carolina Mandl 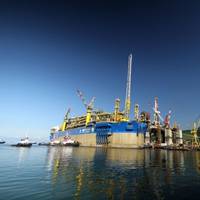 Brazilian state-run oil company Petroleo Brasileiro SA has received an initial payment of 549 million reais ($148.92 million) from Dutch marine engineering group SBM Offshore as part of a 1.22 billion-real leniency deal, the Brazilian government said on Monday.As a result of a long-running corruption investigation, SBM was accused of paying bribes to secure contracts with Petrobras, as the state-controlled oil company is known.($1 = 3.6866 reais)(Reporting by Alexandra Alper; editing by Jonathan Oatis)

Petrobras to Resume Building Its Own Platforms 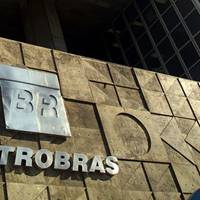 Brazil's Petroleo Brasileiro SA will build its own oil platforms again from 2023, regardless of who wins the presidential election next month, an executive at the state-run oil company said.Petrobras' 2019-2023 business plan, set to be released in December, should include a resumption of platform construction thanks to the company's improving finances, Petrobras' director for production and technology development Hugo Repsold said."We will build platforms independently of who is president…

Petrobras Output in Campos Drops to Lowest Level in 17 Years 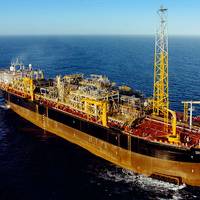 Oil production by Brazilian state-led Petroleo Brasileiro SA in the Campos basin fell 1.4 percent in June over the previous month to 1.042 million barrels a day, its lowest level since 2001, as mature fields decline, according to company data.Output has dropped 15.8 percent in 12 months due to the ageing of fields off-shore from Rio de Janeiro and Espirito Santo that account for almost half of the crude pumped by Petrobras.

Fall from Grace: Batista Gets 30-Years for Corruption

Eike Batista, the former mining and oil magnate who was once Brazil's richest man, was convicted and sentenced to 30 years in prison for bribing Rio de Janeiro state's disgraced ex-governor, according to a court document published on Tuesday.Batista's conviction and sentencing by federal judge Marcelo Bretas are the latest in a wave of graft investigations that have sent scores of powerful businessmen and politicians to jail.The eccentric former billionaire's meteoric rise and fall mirrored the recent fortunes of Brazil, where the commodities boom faded as his energy, mineral and logistics empire fell apart earlier this decade.His swashbuckling attitude and confident forecasts of a prolonged golden era for Brazil evaporated just as Latin America's largest economy suffered its worst recessi 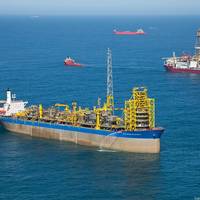 SBM Offshore has reached a settlement to pay additional leniency fines of 200 million reais ($48.27 million) to Brazil's state oil company Petroleo Brasileiro SA, Brazilian prosecutors said on Wednesday.As a result of a long-running corruption investigation, the Dutch marine engineering group SBM has agreed to pay a total of 1.4 billion reais in fines and compensations for its role in the scandal. 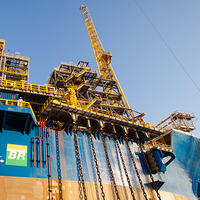 Petroleo Brasileiro SA's chief executive quit on Friday in a surprise move that wiped $12 billion off the state-controlled oil producer's market valuation, after Brazil's government responded to a national trucking strike by intervening in the company's fuel pricing policy.Pedro Parente, who in two years in the job had succeeded in slashing the scandal-plagued company's debt and restoring it to profitability, said in a resignation letter to President Michel Temer it was clear after the last week's turmoil that new talks would be needed on pricing policy."Given this situation… Brazilian state-run oil company Petroleo Brasileiro SA (Petrobras)will seek a valuation of up to 22 billion reais ($6.8 billion) for its fuel distribution unit in what is expected to be Brazil’s biggest IPO of the year, reported Reuters. The Brazilian energy giant intends to raise around $2.3 billion or $7.5 billion reais at the high end of the price range of 15 reais-19 reais per share. Petrobras is expected to offer between 25% and 40% of its stake in BR Distribuidora. The offering…

SBM Offshore to Pay $238 Mln in US Bribery Case

SBM Offshore NV, a Netherlands-based maker of offshore oil drilling equipment, and its U.S. subsidiary, SBM Offshore USA Inc, agreed to settle criminal charges of bribing officials in five countries and pay a $238 million penalty, the U.S. Justice Department said on Wednesday. The companies agreed to settle charges related to schemes lasting more than a decade involving bribery of foreign officials in Brazil, Angola, Equatorial Guinea, Kazakhstan and Iraq, in violation of the Foreign Corrupt Practices Act (FCPA), the Justice Department said in a statement. SBM Offshore USA pleaded guilty on Wednesday in the U.S. District Court for the Southern District of Texas, the statement said.

Offshore driller Rowan Companies plc said it has purchased two LeTourneau Super 116E jack-up rigs, the P-59 and P-60, both delivered new into service in 2013, in a public auction from a subsidiary of Petroleo Brasileiro S.A. for $38.5 million per unit. As reported in May 2017, Rowan was the high bidder in a Petrobras public auction with a bid price of $30 million per rig. While the high bid was not accepted by Petrobras, after negotiations, both parties agreed to the revised price. Rowan sad it intends to mobilize the jack-ups to the Middle East from their current location in Brazil in late first quarter 2018. Tom Burke, President and Chief Executive Officer, said, “We consider this purchase an opportunistic investment, made near a cyclical low, at a highly attractive price.

Brazil's state-controlled oil company, Petroleo Brasileiro SA, said on Monday it adhered to a federal tax refinancing program to settle taxes owed on vessel leasing contracts.   Petrobras, as the company is known, said in a securities filing the company would pay 1.7 billion reais ($538.5 million) in 12 monthly installments beginning this month.   The payments would have a negative effect of 1.1 billion reais on fourth-quarter earnings, the company said.   ($1 = 3.1574 reais) (Reporting by Tatiana Bautzer; Editing by Peter Cooney)

Aldemir Bendine, the former chief executive of state-controlled oil firm Petroleo Brasileiro SA and Banco do Brasil, was found guilty on Wednesday of corruption charges and sentenced by a federal judge to 11 years in prison. Judge Sergio Moro ruled that Bendine used his position at Petrobras to take 3 million reais ($924,527) in bribes from construction firm Odebrecht. "The condemned took his position as CEO of Petrobras amid a corruption scandal and with the expectation that he would solve problems," Moro wrote in his ruling. Bendine's legal team did not immediately reply to requests for comment. His attorneys said throughout the trial that he was innocent and that no company received special benefits from Petrobras or Banco do Brasil under his leadership.