Containership Grounds in the Bosphorus Strait

A foreign cargo ship ran aground in Istanbul's Bosphorus strait on Friday, requiring a rescue operation and prompting authorities to temporarily close the picturesque and crowded waterway running through Turkey's largest city.There were no injuries or casualties, the governor's office said, adding that the ship had reported engine failure shortly before its grounding near the shore.There was no damage to the concrete walkway running along the shore, Reuters witnesses said.The Bosphorus, among the world's busiest shipping routes, was temporarily closed to international traffic as boats towed the vessel south towards the Sea of Marmara.The Liberian-flagged Songa Iridum had come from Ukraine's Odessa and was headed for Istanbul's port of Ambarli, according to Refinitiv Eikon shipping data. 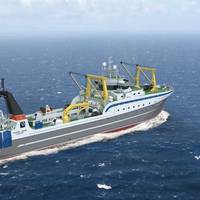 Damen Marine Components (DMC) signed its first order with a Turkish Shipyard. The client is TERSAN Tersanecilik San. Tic. Aṣ., based at Yalova City on the Sea of Marmara, and the equipment will be installed on a 108-meter Factory Freezer Trawler vessel. Designed by Skipsteknisk AS, design number STL191L, it is currently in build for the Russian fishing fleet operator JSC PT Okeanrybflot.The order is for a single, customised Barke rudder with a surface area of 16 m² and a Commander rotary vane steering gear that delivers a torque of up to 430 kNm. 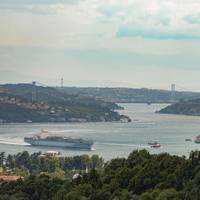 Turkey announced on Monday the route for a planned canal that would reduce shipping traffic on the busy Bosphorus Strait and transform the European half of Istanbul into an island. Work on the 45-km (28-mile) Kanal Istanbul, linking the Black Sea and the Sea of Marmara west of the Bosphorus, will begin this year, Transport Minister Ahmet Arslan said, adding it formed part of Turkey's most expensive construction project. The Bosphorus is one of the world's busiest waterways with 42,000 vessels passing through in 2016 - compared with 16,800 that transited the Suez Canal in the same year.

CMA CGM upgrades its offer between the Eastern and Western Mediterranean Sea with the new MARMARA EXPRESS line. "We are pleased to announce the new service offer MARMARA EXPRESS which directly links Turkey, Spain, France, Greece and Italy," says a company statement. This fast and reliable service will answer the recent growth of trade between Turkey and the Western Mediterranean countries. The ports of the Sea of Marmara, which are located in the North of Turkey between the Aegean and the Black Sea…

Russian Ship Runs Aground in Istanbul

Bad weather forced a Russian ship to run aground in Istanbul on Friday and the crew was awaiting rescue, Turkey's Dogan news agency reported. The ship ran aground near Istanbul's Kartal district, on the Asian side of the city and on the coast of the Sea of Marmara, Dogan reported. Istanbul's European and Asian sides are separated by the Bosphorus Strait, an important international shipping lane for oil and grain.   (Reporting by Yesim Dikmen; Writing by David Dolan)

Russia's oil pipeline monopoly Transneft has the capacity to reroute oil from Russia and the Caspian Sea to other destinations if Turkey shuts the Bosphorus or Dardanelles straits, RIA News agency cites Transneft chief as saying. Turkish maritime authorities on Saturday shut the Bosphorus Strait to tankers for several hours following what the government said was an attempted coup. The strait, which links the Black Sea and Sea of Marmara and is important for oil shipping, was reopened the same day. Nikolai Tokarev, the head of Transneft, said the company has enough spare capacity in its westbound pipeline system to reroute oil in the event of any further closures of the straits.

The Royal Australian Navy’s helicopter frigate HMAS Anzac has arrived in Portsmouth, England, as part of her NORTHERN TRIDENT 2015 deployment. Anzac departed Sydney in March 2015, and has transited the Southern Ocean, Indian Ocean, the Red Sea, Suez Canal, the Mediterranean Sea and most recently the North Atlantic en route to Portsmouth. During the five month deployment, the ship has represented Australia at Centenary of Anzac commemorative events in the Sea of Marmara, Cape Helles, Gallipoli and Italy and Malta.

Located on the periphery of two great continents, Turkey has benefitted from being in a favored position right at the center of an assertive and fast growing economic area. This geographical location finds Turkey in a very favorable position. Despite the general economic recession, the country’s shipping ports and shipbuilding sectors have faced challenges resolutely and expanded consistently. With a coastline of approximately 8,483 km, (1,067 km of which are island shores) Turkey is situated to the southeast of Europe…

Istanbul Metropolitan Municipality has released the details of the construction and zoning plans for Kanal Istanbul project, which will be built on the European side of Istanbul and it will connect the Black Sea to the Sea of Marmara. The plans for the artificial sea-level waterway and a new town to be located on 95 acres will be issued by the Municipality. Building permits will be issued after approval by the Ministry of Environment and Town Planning. The ministry has "reserved" an area that is included within the borders of the districts of Avcılar…

According to a report on http://www.todayszaman.com, a ferry running between İstanbul's Yenikapı port and Güzelyalı, Bursa, collided with a RoRo ship in the Sea of Marmara on Monday, narrowly avoiding capsizing. The ferry was said to be carrying 830 passengers and 150 vehicles when collided with the RoRo ship off Sivriada early on Monday, December 26. There were no casualties reported. The ferry returned to Yenikapı after the crash, where the passengers were evacuated from the ferry. There was massive damage on the ship's bow.   (Source: http://www.todayszaman.com)

Broadband Antenna Tracking Systems, Inc. (BATS) has successfully demonstrated an industry-first ship-to-ship wireless broadband communications tracking system integrating its BTS-2500 units with two wireless broadband radios. The demonstration was conducted on the Sea of Marmara for a customer that is seeking a cost-effective communications tracking system with high bandwidth and low latency that can cover great distances for its fleet of ships. The BATS tracking systems were mounted on the main mast of each ship at a height of 16 meters above the sea. The live demonstration involved ships simultaneously moving at speeds up to 13 knots and at distances up to 44 kilometers apart. The RSSI was around -50 when the distance between the ships was under 20Km and -60 between 20-40Km.

Ro-Ro ferry operation. The destination had been 'out of reach' to Navibulgar, whose two 13,000 DWT rail, truck and car ferries - Geroite na Odessa (Hero of Odessa) and Geroite na Sevastopol - were originally constructed with a single stern door designed to be accessed by shore ramp, which Derince and many other ports in the region do not possess. range of additional port options. companies. components. achieved on-time and on-budget. Navibulgar's second ferry, Geroite na Sevastopol. trucks. passenger berths. former Yugoslavia. and Yugoslavia. Russian 1520mm gauges. company in Bulgaria. Black Sea every year. fleet.

Donjon Marine's 7,200 hp salvage tug Powhatan deliverd the fourth and final ex-U.S. Navy frigate to the Turkish Governement. Donjon Marine had been contracted last year to tow the frigates ? three in Philadelphia and one in Charleston, S.C. - and deliver them to the Turks in the Sea of Marmara. Each frigate (414 x 44 x 24 ft.) was towed by the company's 225 ft. U.S. flag salvage tug, the largest such salvage tug operating under the U.S. flag. The third frigate was towed across the Atlantic Ocean by Donjon's tug Atlantic Salvor, a 6,480 hp ocean tug.