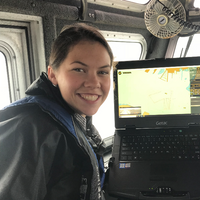 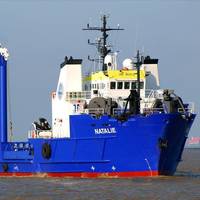 An offshore supply vessel was reportedly attacked offshore Mexico on Friday, July 24, in an incident that was described as a "violent armed boarding and robbery of personal belongings."The maritime safety intelligence company Dryad said Monday that the offshore supply vessel Natalie was boarded while conducting operations in the vicinity of the ODIN Offshore platform 12nm NE of Coatzacoalcos."It is understood that the vessel was boarded early morning within hours of darkness. 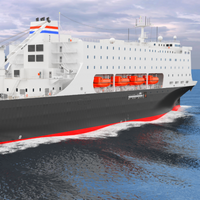 Wabtec Corporation said it has been awarded a contract worth more than $10 million to supply engines for the first two of the U.S. Maritime Administration’s (MARAD) National Security Multi-Mission Vessels (NSMVs) being built at Philly Shipyard.In April Philly Shipyard was selected to build up to five NSMVs that will enable at-sea training for America’s future mariners and support humanitarian assistance and disaster relief. The first two NSMV ships will be homeported at state… 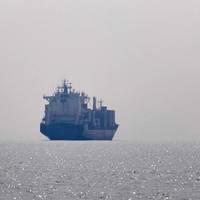 The U.S. Maritime Administration (MARAD) is advising vessel operators to exercise extra caution and safe navigation practices after multiple instances of significant GPS interference have been reported over the last year by vessels in port and underway in the eastern and central Mediterranean Sea, the Persian Gulf, and the Port of Shanghai, China.The incidents have resulted in lost or inaccurate GPS signals affecting bridge navigation, GPS-based timing, and communications equipment…

The National Freight Strategic Plan and the Inland Waterways 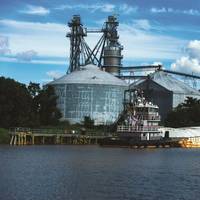 The Fixing America’s Surface Transportation (FAST) Act was enacted in December 2015. The FAST Act required the U.S. Department of Transportation (DOT) to develop a National Freight Strategic Plan to address multimodal freight transportation. In the Federal Register of December 27, 2019, DOT requested information from the public, including industry trade groups, to aid development of the National Freight Strategic Plan.This article summarizes certain of the comments that were submitted by Inland Rivers, Ports and Terminals, Inc. (IRPT) in response to DOT’s request. 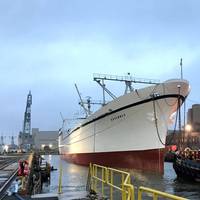 The world’s first nuclear-powered ship is making its way back to Baltimore flowing a repair stay in Philadelphia.On Thursday, the N.S. Savannah began its journey back from drydocking in preparation for decommissioning.Having spent the last few months at Northeast Ship Repair undergoing general inspection, repairs and structural modifications, the ship will be back at home at the Canton Marine Terminal by Friday.While the last nuclear fuel was removed from the ship more nearly 50 years ago… 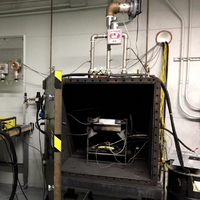 A new joint industry report offers recommendations for enhanced battery safety on vessels.The report, released by DNV GL in collaboration with the Norwegian, Danish and US maritime authorities, battery manufacturers, system integrators, suppliers of fire extinguishing systems, shipyards and shipowners, assesses explosion and fire risks in maritime battery installations and the effectiveness of fire extinguishing systems in the event of a battery fire.While onboard battery power represents a pathway toward more environmentally friendly vessel operations… 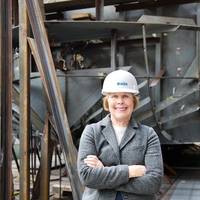 Marine News recently visited the Blount Boats facility in Warren, Rhode Island. While the year 2019 might be the ‘year of the woman’ in the eyes of the International Maritime Organization, the two women at the head of Blount Boats – Marcia & Julie Blount– have been a driving force in the U.S. boatbuilding market for decades. As Blount’s celebrates its 70th anniversary, read about the storied yard’s promising future.Founded in 1949, Blount Boats is a full-service shipyard with a customer base comprised of a variety of commercial and government entities including the U.S. Coast Guard, U.S. 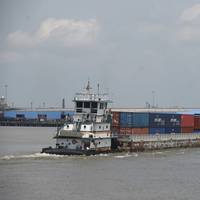 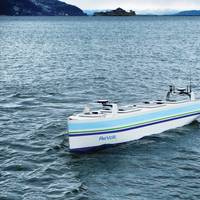 Maritime autonomous surface ship (“MASS”) technology continues to advance at a rapid pace around the globe. Although it’s not being embraced as quickly in the United States commercial market as other parts of the world, U.S. industry professionals and regulators look forward to continued development and implementation as a means to improve efficiency and safety.OpportunitiesThe U.S. Maritime Administration (“MARAD”) hosted “Achieving Critical MASS: Spotlight on the U.S. Vessel Automation Industry” July 22 and 23, 2019, encouraging discussion between U.S. 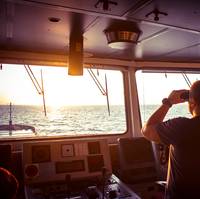 The U.S. maritime agency has told U.S.-flagged commercial vessels they should send transit plans in advance to American and British naval authorities if they intend to sail in Gulf waters following several incidents over tankers involving Iran.The seizure of commercial vessels and attacks on tankers near the Strait of Hormuz have unsettled shipping lanes that link Middle Eastern oil producers to global markets.The United States, which has increased its military forces in the region… 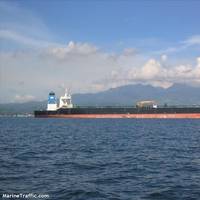 Tensions between Iran and the West have escalated since U.S. sanctions on Iranian oil exports took full effect and British naval forces seized an Iranian supertanker.Below is a timeline of recent incidents:May 2 - The United States, which withdrew from an international nuclear accord between Iran and global powers in 2018, ends waivers that had allowed some mainly Asian importers to continue buying Iranian crudeMay 5 - The United States says it is deploying an aircraft carrier strike group and bombers to the Middle East… 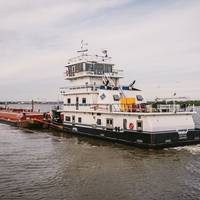 The U.S. towing and tug business is 5,500 boats, more than 31,000 barges with an estimated total impact on U.S. GDP of $33.8 billion.“At a macro level, the bigger ships are causing downward pressure on the ship assist business because there are fewer ship calls given the increased capacity of these vessels. However, certain ports have seen tremendous growth, based on strategic location and infrastructure investments that have attracted these larger ships and been a net plus for these areas.”Kate Fuhrman…

The U.S. ambassador to Saudi Arabia said Washington should take what he called "reasonable responses short of war" after it had determined who was behind attacks on oil tankers off the coast of the United Arab Emirates.Iran was a prime suspect in the sabotage on Sunday although Washington had no conclusive proof, a U.S. official familiar with American intelligence said on Monday. Iran has denied involvement."We need to do a thorough investigation to understand what happened, why it happened, and then come up with reasonable responses short of war," Ambassador John Abizaid told reporters in the Saudi capital Riyadh in remarks published on Tuesday."It's not in (Iran's) interest… 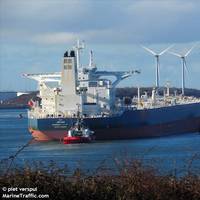 Saudi Arabia said on Monday that two of its oil tankers were among those attacked off the coast of the United Arab Emirates and said it was an attempt to undermine the security of crude supplies amid tensions between the United States and Iran.The UAE said on Sunday that four commercial vessels were sabotaged near Fujairah emirate, one of the world's largest bunkering hubs lying just outside the Strait of Hormuz, but did not describe the nature of the attack or say who was behind it.The UAE had not given the nationalities or other details about the ownership of the four vessels. 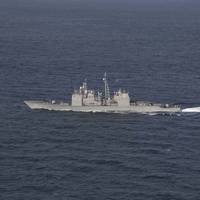 U.S. commercial ships including oil tankers sailing through key Middle East waterways could be targeted by Iran in one of the threats to U.S. interests posed by Tehran, the U.S. Maritime Administration said in an advisory.The U.S. military said this week that a number of B-52 bombers would be part of additional forces being sent to the Middle East to counter what the Trump administration calls "clear indications" of threats from Iran to U.S. forces there. The Islamic Republic has dismissed the U.S. contention of a threat as "fake intelligence".In the advisory posted on Thursday, the U.S.

INLAND FINANCE: But I Don’t Need That Much 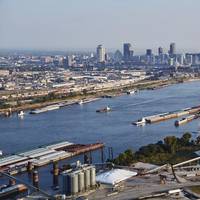 When enough to meet the need is not enough to get the help.From my office window in downtown St. Louis, I can see a dramatic illustration of the inefficiency in how our country moves freight. My office faces east, and I look down on a stretch of Interstate 70, that major east-west highway that runs from Baltimore to Interstate 15 in Utah. It is not unusual to see the traffic on this highway heavily congested, even at a standstill at times. This congested traffic usually includes many tractor-trailer trucks. 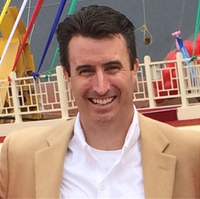 SUNY Maritime College has appointed Captain Morgan McManus as the Master of the T/S Empire State VI. An alumnus of SUNY Maritime College, Captain McManus graduated in 1992 with a bachelor’s degree in Marine Transportation.Captain McManus has over 12 years’ experience sailing as Master including on the SS Cape Jacob, the sister ship to T/S Empire State VI. His sailing career has taken him on various types of commercial ships including steam, motor, breakbulk, container, car carriers, tankers, and cutting-edge dynamic positioned drill ships. 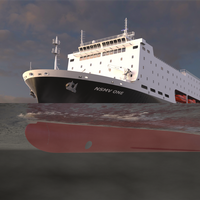 As of 31 December 2018, the two-containership order for Matson is approximately 95% complete. On 31 October 2018, Philly Shipyard delivered the first vessel (Hull 029) in the two-containership order for Matson. Philly Shipyard continued to idle certain operations and impose layoffs due to the lack of new orders after the Matson project.Key Financial Data:Fourth quarter and full year 2018 operating revenues and other income of USD 19.4 million and USD 129.2 million, respectively…

The Port of New Orleans (Port NOLA) moved more containers in 2018 than at any time in its history, totaling 591,253 twenty-foot equivalent units (TEUs), up 12.3 percent compared to one year ago.The deep-draft multipurpose port at the center of the world's busiest port system -- Louisiana's Lower Mississippi River said in a press release that the record marks the fifth year in a row Port NOLA has surpassed the half million TEU-mark at its Napoleon Avenue Container Terminal, which… 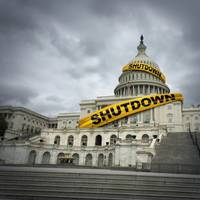 The U.S. government shutdown has delayed Enterprise Products Partners LP's plan to build a major U.S. crude export terminal off Houston, blocking the pipeline operator from filing paperwork with U.S. regulators, an executive said on Wednesday.Enterprise plans to file a 10,000-page permit application with the U.S. Maritime Administration and the U.S. Coast Guard as soon as the U.S. government reopens. It takes about a year for regulators to process an application for a deep-water terminal."Tell me when the government opens and I'll tell you when it happens…

Inland River Cruising: 2019 Will Be Busy 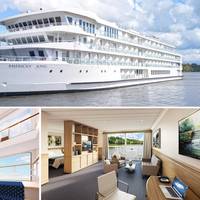 One year ago, we reported on vacation river cruising, presenting an industry mostly on the optimistic side of growth and expansion for 2018. This year’s review is more geographically limited – to the Mississippi River, heartland cruises centered among New Orleans, Memphis, St. Louis and St. Paul – but with links important for a lot of smaller cities in between.Big picture:This industry is strong, at least among its two major players: American Cruise Lines and the American Queen Steamboat Company. Both have extensive and varied schedules for 2019.