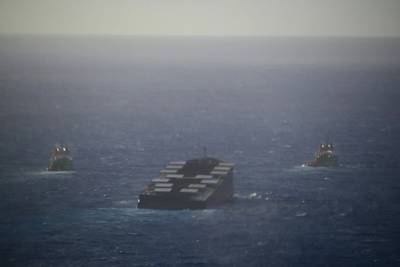 Mauritius said on Wednesday it planned to scuttle the Japanese-owned bulk carrier that ran aground off its shores and spilled oil over pristine waters and fragile coral reefs.

Earlier on Wednesday Nagashiki Shipping, owner of the MV Wakashio, apologized for the incident. Two of the ship's officers were arrested overnight on charges of endangering safe navigation.

The MV Wakashio struck a coral reef off the Indian Ocean island on July 25 and began spilling oil on August 6, prompting the government to announce a state of environmental emergency.

The spill spread over a vast area of endangered corals, affecting fish and other marine life in what some scientists have called the country's worst ecological disaster. Emergency crews removed most of the ship's remaining oil before it split apart on Saturday.

Mauritius National Crisis Committee said on Wednesday it planned to scuttle the ship's remains at sea at a yet to be determined date. It would do so in a way that would avoid further pollution or interfere with maritime routes, it said in a statement.

It had taken in recommendations from various groups on how and where to sink the ship to conform with advice of French experts present on the island, it said.

"Sinking this vessel would risk biodiversity and contaminate the ocean with large quantities of heavy metal toxins, threatening other areas as well, notably the French island of La Réunion," Happy Khambule of Greenpeace Africa said in a statement.

Nagashiki Shipping said it would support the crew and their families.

"We sincerely apologize for causing a great deal of inconvenience to everyone involved, including everyone in Mauritius, due to this grounding accident and oil spill," it said in a statement.

Scientists say the full impact of the spill is still unfolding but the damage could affect Mauritius and its tourism-dependent economy for decades. Removing the ship is likely to take months.