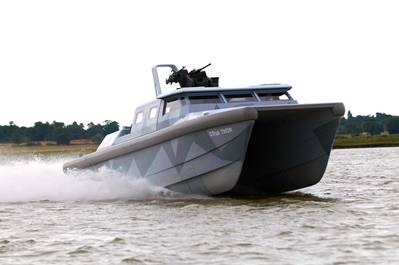 Lessons learned from the increase in building workboats for the offshore wind farm sector can benefit the military user, according to CTruk CEO Andy White.

Developments in vessel design, construction and operation as a result of the demanding requirements of the offshore wind sector could translate to future procurement of military craft, White told the audience at a Royal Institute of Naval Architects (RINA) conference entitled Warships 2015: Future Surface Vessels.

Because of budgetary pressures, naval customers were looking for substantial through-life savings in operating, training, maintenance and support of their craft. Craft built for the wind farm sector were already delivering those benefits, as evidenced by the performance of composite vessels from Essex-based CTruk, which has built nearly 30 boats for the sector.

According to CTruk, an element in delivering those savings was its flexible pod system which has enabled wind farm service operators to reconfigure boats for different roles. White explained that this technology changing the role of workboats would be essential in military organizations’ quest for value-for-money, where they could no longer afford the luxury of nonessential features in their craft.

“Procuring a platform to fulfill one task is now the exception rather than the norm. A modular philosophy and genuine ability for platforms to carry out multiple roles is appealing in a sector where reliability, maintainability, availability and durability (RAMD) are standard Key User Requirements,” White explained.

“The offshore wind industry in the U.K. has driven unprecedented growth in workboats under 24 meters. The developments in this sector will increasingly cross over into the military sector.”

There was also synergy between the operational demands of boats used for the offshore wind sector and military requirements. Like the transport of technicians to offshore wind farms, military personnel required a high speed  and comfortable transit; flexible payload capacity; good range and endurance; a stable platform; ability to operate in shallow inshore waters and disrupted sea states; maximum craft availability and minimum maintenance.

Catamaran, SWATH and SES (Surface Effect Ship) technology offered those capabilities, White explained, while the growing demand for composite craft in the wind farm industry underlined the advantages of this hull material.

“The use of advanced composite in boatbuilding offers several key advantages, including an average 30 percent weight saving compared to aluminum and lower OPEX cost due to fuel savings and simpler mechanical drive trains,” White said.

Other advantages of composite were that it was noncorrosive; energy absorbing, so more resistant to impact damage; noise absorbing; light weight but robust;  acted as a good thermal insulator protecting the inside of a craft from extreme external temperatures; was manufactured as a single piece of material so had no weak joints or welds and had low lifecycle costs.