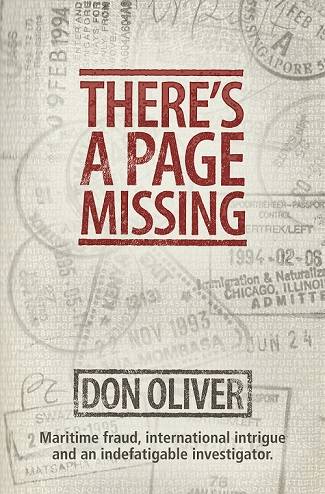 Maritime fraud, international intrigue and an indefatigable investigator – all add up to a fascinating account of the extraordinary people bent on fooling the system with mind boggling schemes.

Author Don Oliver is a specialist maritime insurance surveyor who has visited countless ports and places throughout the world, uncovering the truth behind insurance claims. Suspicious, audacious and fraudulent – he’s seen them all and on the way invented some detection devices that have stopped criminals in their tracks.

Arriving from the U.K. in the early 1950s with a floundering school career, his father enrolled him into the General Botha, the South African Nautical College. To coin a phrase, while it was not all plain sailing Oliver had inherited his detective father’s enquiring mind and on leaving school was offered a job in the Marine Department of the Royal Insurance Company in Cape Town. Acquiring a taste for marine surveying he went on to join EA Hiles and from there to start his own company, working with the world’s top insurance companies.

With an investigator’s eye and more than a few questions Oliver has uncovered insurance scams that read like a thriller; with mayhem and a few narrow escapes the ingenuity of the fraudster is not to be undermined – until someone like Oliver comes along.

Not content with retiring Oliver tells the stories of some of the more audacious escapades with a keen eye and a sense of humour (some of the attributes that a marine surveyor is allegedly required to have). Readers will recognize some of the ingenious plots that have been uncovered and marvel at those that did not hit the press.

Fast moving and a book to dip into, Oliver uncovers a world that for many would seem mundane and slow – far from it, this is the undercover story of those who would buck the system and an investigator who never lets go until the truth is revealed.

Published by scamp (an imprint of Publishing Print Matters)