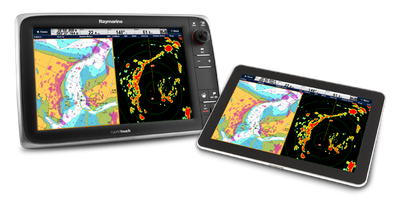 Nashua, N.H. – Raymarine announced the release of its Raymarine Viewer app, RayView, for Android tablets and Smartphones. The new app, available now in the Google Play Android store, joins the previously released RayView app for Apple iOS devices, like the iPhone and iPad.

Taking advantage of the built-in Wi-Fi networking in its new c-Series and e-Series Multifunction Displays, the RayView app enables boaters to view the screen from their multifunction display right on their mobile device.

With c-Series or e-Series and RayView, users enjoy the convenience of having a portable repeater system in their pocket. They can download the application, connect their device to the MFD’s Wi-Fi network, and stream charts, sonar, radar and thermal night vision from anywhere onboard.

RayView for Android is compatible with Android Smartphones and Tablets running version 2.2 or higher, with 1GHz or faster processors. RayView for Apple iOS devices works with the iPhone 3GS or newer, iPod Touch 3rd generation, or newer and iPad (all models) running iOS 3.2 or later.