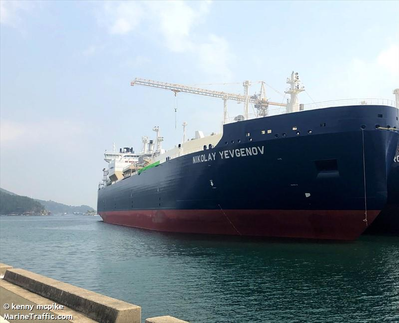 A new ice-breaking liquefied natural gas (LNG) tanker of the Arc7 class, the Nikolay Yevgenov, is due to arrive this week in Sabetta, the Arctic Russian port of Novatek's Yamal plant, Refinitiv shipping data showed on Monday.

The tanker is off the west coast of Ireland at the moment, having left the Daewoo Shipbuilding and Marine Engineering (DSME) Okpo shipyard in South Korea at the end of April, Refinitiv Eikon shipping data showed.

It is due to arrive on May 26, according to the data, five months ahead of the schedule set by its operator, Teekay LNG Partners.

The Vladimir Voronin, also operated by Teekay, is set to begin sea trials imminently. The data shows it to be on the water in Okpo already.

Yamal needs the ice-breaker tankers to ship LNG out of Arctic waters. Since the plant began operations in December 2017 the tankers have largely conducted ship-to-ship transfers of LNG to conventional carriers, but during summer months they can traverse the Northern Sea Route eastwards to China.

Three more Arc7 tankers are due to be delivered to Novatek under an original order of 15 such vessels.