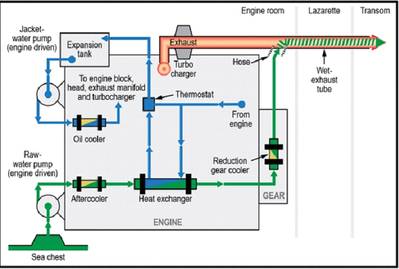 (This graphic depicts a simplified diagram of the cooling water system aboard the small passenger vessel Island Lady. The NTSB’s investigation of the Jan. 14, 2018, fire aboard the vessel revealed that the failure of the port engine’s raw-water pump led to overheating of the engine and exhaust tubing, which led to the fire. Diagram by NTSB)

The National Transportation Safety Board determined during a public meeting held Tuesday that an insufficient preventative maintenance program and lack of guidance for responding to engine high-temperature conditions, led to the Jan. 14, 2018, fire aboard the small passenger vessel Island Lady, in the waters of the Pithlachascotee River, near Port Ritchey, Florida.

The Island Lady was a 72-foot-long passenger vessel operated by Tropical Breeze Casino Cruz, LLC., used to shuttle passengers and company employees to and from the casino boat Tropical Breeze I. On the day of the fire, the Island Lady was carrying 36 passengers, a crew of four, two “pre-hires” and 11 other employees. Of the 53 people aboard that day, 15 were injured and transported to local hospitals. One passenger died several hours after the fire. No pollution was reported in connection with the accident, and damage to the Island Lady resulted in the vessel, valued at $450,000, being declared a constructive total loss. While the accident was not declared a major marine casualty, the NTSB investigated this accident as an accident of recurring character because of a similar fire in 2004 on board the Express Shuttle II, another of the operating company’s vessels.

On the day of the fire, the Island Lady was en route to the Tropical Breeze I, located about nine miles offshore in the Gulf of Mexico. Just before 4 p.m., the captain received a high-temperature alarm for the port engine’s jacket-water system. The captain turned the Island Lady around to return to the dock and notified the operating company. Smoke began filling the lazarette, main deck spaces and engine room. The captain deliberately beached the vessel close to shore in shallow water and all passengers, crew, and company employees evacuated by jumping from the vessel into the water and wading ashore.

As a result of its investigation, the NTSB issued four safety recommendations with two issued to Tropical Breeze Casino Cruz, LLC and two to the U.S. Coast Guard. The safety recommendations issued to Tropical Breeze Casino Cruz seek the development and application of an oversight system to ensure their maintenance program complies with the manufacturer’s recommended preventive maintenance program and revision to the company’s marine firefighting training program. Safety recommendations issued to the U.S. Coast Guard seek a requirement for fire detection systems in unmanned spaces with machinery or other potential heat sources on board small passenger vessels and the issuance of a Marine Safety Information Bulletin addressing the need to use only approved material and components in fuel tank level-indicator systems.

“Safety isn’t something you have, it’s something you do,” said NTSB Chairman Robert Sumwalt. “Are vessel operators being required to do it? All over the country this morning, crew training is either being conducted, or it is being neglected. Manufacturer’s recommended maintenance programs are being followed or they are being disregarded, leaving the safety of vessels and their passengers at risk.”

The archived webcast of the board meeting is available online for 90 days at ntsb.windrosemedia.com.