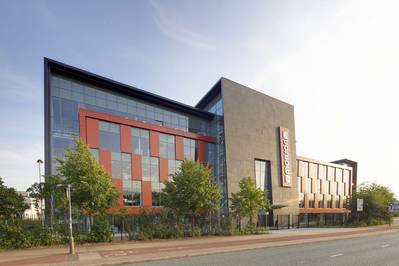 uilding of the SENER premises in Manchester

SENER opened an Engineering and Construction division in Manchester to reinforce its presence in the United Kingdom.

The group already has work sites set up in the UK and it maintains a close 25-year relationship with Rolls Royce through ITP, a leader in the global market for industrial and aeronautical engines in which SENER (53.125%) and Rolls Royce (46.875%) are the two shareholders.

The new office will lend the support needed for ongoing projects such as the construction of two Queen Elizabeth-class aircraft carriers for the Royal Navy. The units benefit from the engineering and data creation technology of the FORAN System, SENER’s CAD/CAM/CAE software for the design and construction of ships and offshore units. The FORAN System – which celebrates its golden anniversary in 2015 – is also being used in two additional projects for the Royal Navy: the Successor series of new nuclear submarines; and the new Type 26 frigates. At the same time, SENER is looking into a number of other projects in the United Kingdom in the Aerospace, Energy and Environment, and Infrastructures and Transport sectors, which will also be steered by the Manchester headquarters.

Managing Director of SENER, Jorge Unda, states that “The new division in Manchester is part of our strategy for continued international growth and will allow us to develop close and trusting relationships with our clients — fundamental in our sector —, expand our business opportunities in the United Kingdom and offer competitive technology-based advantages, which is essentially what makes us stand out from our competitors. When setting up in new areas, the SENER Group’s intention is always to put down roots and strive to become centres of excellence and benchmarks within the local industry”. He adds, “We have been operative in the United Kingdom for many years and have important clients there in the marine and aerospace sectors; it has a very strong technological industry”.

In fact, the SENER Group has had offices in the UK since 2008 through a subsidiary of ITP (ITP Engines), which has 230 employees and operation centres in Whetstone (Leicestershire), Lincoln and Rugby. These facilities engineer and manufacture aeronautical engines, with a strong inherited tradition in propulsion engines passed down directly from Power Jets Ltd, the company founded by Sir Frank Whittle. ITP also has two service support centres in York and West Sussex.

It is also worth highlighting the collaboration with British technological institutions and universities such as the HR Wallingford research centre, with which SENER is working on the project for the new industrial port in Jorf Lasfar, Morocco.

The SENER Group saw out the 2013 financial year with a turnover of $1.9 billion and growth of 7.6% on the previous year. The SENER workforce increased by 3.8% to 5,570. Investment in R&D was $115.44 million, representing 5.8% of the Group’s turnover. These figures place SENER as one of the leading multi-disciplinary engineering groups in R&D and in the development of technologically-differentiated international projects.