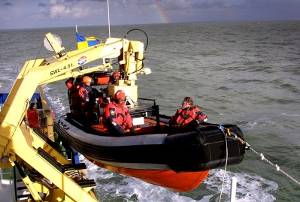 The Palfinger Group is acquiring a 75% interest in the Dutch company Ned-Deck Marine B.V. (NDM). NDM manufactures rescue boat davits, a special application of marine cranes. The company is headquartered in the Netherlands and has another production facility in Vietnam. The existing management team will stay in place.

With the entry in the market of ship-mounted cranes Palfinger is expanding its previous truck-related product range. With its davit systems NDM primarily operates on the market of ships with equipment fulfilling the requirements of the UN Convention for the Safety of Life at Sea (SOLAS). The obligatory annual servicing of the safety equipment by the manufacturer or a party certified by the manufacturer makes after-sales services a substantial part of total business operations.

“Despite a 30% market decline, the revenue generated by NDM in 2009 remained stable. Further growth will also significantly add to the importance of the servicing business of existing equipment,” remarked Herbert Ortner, CEO of Palfinger AG, on NDM’s future. “On the SOLAS market certified quality is of top priority.”

With a staff of approximately 100, NDM generated revenues of almost $25.7m in 2009. The Vietnamese production facility, benefiting from low wage costs as well as its proximity to the Chinese procurement market and to major target markets like Japan, Korea, China, and Vietnam, has also contributed to these revenues.

To further expand its ship crane business Palfinger is already planning another acquisition. The favored target is the marine crane division of Palfinger systems GmbH, which is owned by the Palfinger family and includes a business with a staff of approximately 150 generating approximately $38.6m in revenues. The due diligence of the business to be acquired will start in July. “We have been interested for quite some time in re-integrating the marine crane business into Palfinger AG as a meaningful and profitable supplement to our strategy,” explained Ortner.