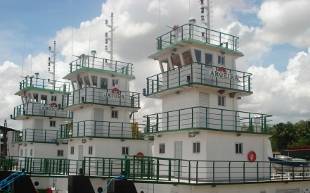 Transdorada Transportes LTDA, a towboat operator on Brazil’s Amazon River, has recently taken delivery of a number of Cummins-powered push boats. These include two 64-ft boats with twin Cummins KTA19-M3 engines each delivering 600 HP and a single 64-ft pushboat with a single KTA19-M3 engine. All three vessels were built at Estaleiro Rio Maguari. The boats will operate on the Amazon River between Belem and Manaus with the 1200 hp twin engined boats pushing six to nine barges and the 600 hp single-screw vessel pushing four barges at a time. The round trip for both sets of vessels is about five days. The vessels carry the names Angico, Jatoba and Aroeira. The DCML Norte the Cummins distributor for Amazon River area supplied the engines. Application engineers on this installation were Adriano Batista and Fabiano Pereira.