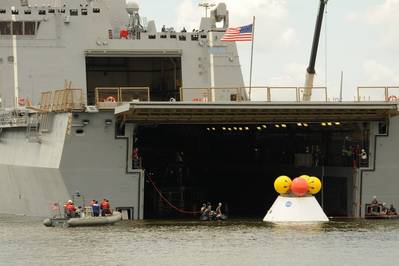 After three days of practice, NASA conducted a stationary recovery test of their latest space craft, the Orion, in the well deck of the amphibious transport dock USS Arlington (LPD 24) while berthed at Naval Station Norfolk's Pier 12 on Aug. 15, 2013.

This successful test of the four-man, 16-foot capsule paves the way for future testing of NASA's Orion Program, including a West Coast underway recovery test in January, and the recovery of a low-orbit module following splashdown in the fall of 2014. NASA plans its first unmanned Orion voyage to take place in 2017, and a manned expedition in 2021.

"Arlington is all about ownership and standards, and Arlington is setting the standards for the other ships in our class that will be assisting in the recoveries of Orion space craft." said Arlington Commanding Officer Cmdr. Darren Nelson. "To be able to work with NASA on the next manned space capsule is a dream come true for many Arlington crew members - they are very excited about this unique opportunity."

Arlington Sailors and Marines assisting with the recovery in front of, adjacent to, and above the well deck throughout the week were joined by more than 75 NASA engineers, designers and technicians from Langley Research Center, Kennedy Space Center and Johnson Space Center.

The testing was overseen by NASA Recovery Director Louie Garcia.

"We performed the recovery several times earlier this week, and have gotten proficient at it," he said. "Today we did everything all together, perfecting the operation as if the capsule had left its orbit and splashed down, sending the small boats out to conduct a safety assessment, hook the taglines up and tow it into the well deck. The capsule was floated in over a cradle in the ballasted ship, and then settled into the cradle when the ship was deballasted.

"We have a requirement that we have the crew hatch opened within two hours of splashdown. We are trying to verify if that is a realistic goal, and so far it has been."

Arlington's namesake predecessor, the major communications relay ship USS Arlington (AGMR 2) assisted with the recoveries of Apollo 8 in 1968, and 10 and 11 the following year.

NASA has been planning the Orion recovery tests for more than five years.

The most challenging part of the Orion recovery was in the "choreography" of all the moving parts, Garcia said.

Arlington, a San-Antonio class warship, has many unique capabilities that make it an ideal partner to support NASA, including the ability to embark helicopters, launch and recover small boats, three dimensional air search radar and advanced medical facilities.

"This is a cost-effective partnership," Nelson noted. "The Navy has the necessary at-sea recovery experience and capabilities and is always willing to work with government and private partners when directed and when it makes the most sense in terms of capability and economy."

The recovery testing aboard Arlington has proven that the U.S. Navy can safely support NASA's requests for operational support without adversely impacting the Department of Defense's primary warfighting mission.

"This is a building block for the United States to conduct manned space flight again," Garcia said.

The ship is named for Arlington County, Va., home of the Pentagon, in honor of the 184 victims and heroes who lost their lives during the terrorist attack there on 9-11.

Arlington is the eighth in Navy's San Antonio class of ships, designed to be the most survivable amphibious vessels ever put to sea. The third in the U.S. fleet to bear the name, Arlington was be commissioned on April 6, 2013. The ship combines 21st century amphibious shipbuilding and warfighting technologies to support current and future

Marine Corps aircraft and landing craft, and will be capable of taking nearly 1,200 Sailors and Marines into harm's way.