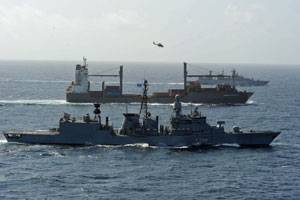 Having been held hostage for four months, Hansa Stavanger is now underway to a safe port accompanied by two EU NAVFOR frigates of the German Navy operating in the area in support of the EU-lead Anti Piracy Operation Atalanta. Shortly after being released by the pirates, a German Navy security team went onboard Hansa Stavanger and provided medical aid and logistical support.

The German owned container vessel Hansa Stavanger has been held hostage by Somali pirates since April 4th this year. Following a successful handover of ransom on August 3rd, Hansa Stavanger was released a few hours later.

Shortly after the pirates had left, German crew EU NAVFOR ship Rheinland Pfalz were embarked on the container vessel by helicopter to assess the situation, provide medical aid and logistical assistance and protection.

Hansa Stavanger will now be escorted by the German Navy to her next port of call.