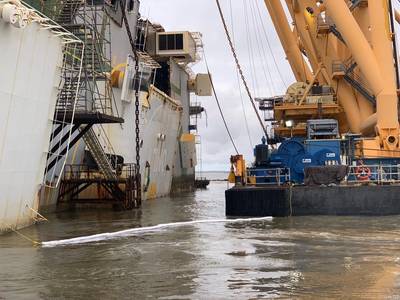 Salvage crews completed cutting operations to separate the stern section from the Golden Ray wreck in St. Simons Sound, Ga., on Saturday night, and the giant piece of the overturned car carrier will be craned onto a barge and hauled away for recycling.

Once lifting preparations conclude, the Barge 455-8 will move into position to receive the separated hull section for transit out of the environmental protection barrier (EPB) surrounding the wreck to nearby Mayor’s Point Terminal for further sea-fastening before transport to Modern American Recycling Services (M.A.R.S.) in Gibson, La. for recycling.

The stern section is the second piece to be cut off from the South Korean-owned Golden Ray, which has been aground on its side outside the nation's second largest car carrier port since it capsized shortly after departing the Port of Brunswick in September 2019.

The wreck will be removed in a total of eight sections using the specialized heavy lift crane vessel VB 10,000. The first piece, the bow section, was cut and removed in November. 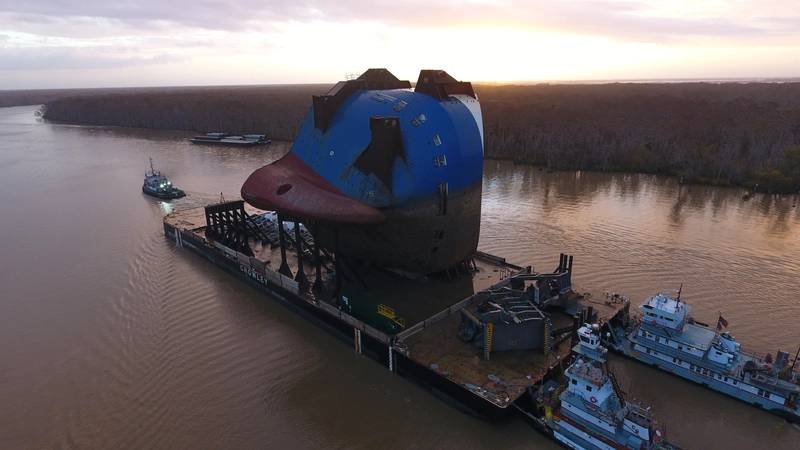 The Golden Ray's bow section was brought through the Bayou Chene Flood Protection Structure (currently under construction) on December 29, on the Crowley barge Julie B, en route to M.A.R.S. in Gibson, La. for recycling. The same barge will bring the next section on its next trip to Louisiana. (Photo: Coral Marine Services, LLC)The salvage project, one of the most complex in U.S. history, has encountered a number of setbacks caused by technical and environmental challenges, including equipment issues, severe weather and COVID-19 outbreak among responders.

Salvors are hoping that lessons learned and equipment modifications made after cutting the bow section will help to accelerate operations.

“We are confident that the time invested to implement modifications to the cutting apparatus as well as perform critical maintenance to the wreck removal equipment will contribute to a safe and efficient cutting operation,” said Incident Commander Chris Graff of Gallagher Marine Systems.

A 200-meter safety zone remains in place around the EBP, and pollution monitoring and mitigation continues on the water in the vicinity of the Golden Ray wreck site and along the shoreline.

“We are ready to mitigate expected debris and other potential threats,” Graff said.

Fires that crippled two Equinor plants in Norway last year were caused by both technical and human errors, the energy company said on Wednesday…