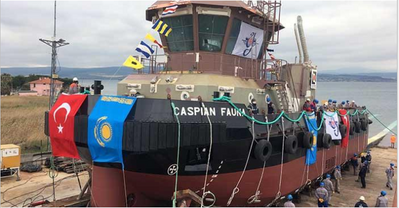 SEAPLACE, a ship design and offshore engineering company relies on FORAN V80R3.0 for the conceptual, basic and details design of the recently launched tugboat, Caspian Fauna.

In late April, the tug was launched at Turkey's Gelibolu Shipyard. It is an ice class 1D tugboat that will operate in the Caspian Sea.

SEAPLACE also used FORAN V80R2.0 to do the detailed engineering of both the structure, machinery and outfitting of the cold storage ship "Siuana Arctica," recently launched in the Zamakona shipyard and which is currently in the final construction stage.

The FORAN software, owned by SENER, can be used to develop every phase of a ship's design in a fully integrated manner and in a single database, which yields a considerable reduction in the delivery time and cost of the project.