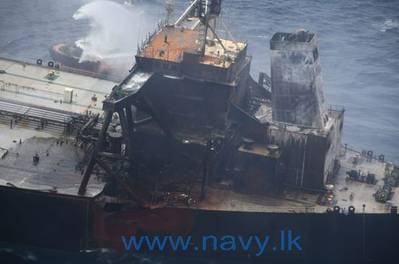 The Sri Lankan navy has towed a fire-stricken supertanker further out to sea to keep it off the coast of the Indian Ocean island after the wind picked up strength and changed direction, a spokesman said on Thursday.

The tanker, loaded with 2 million barrels oil, was 50 nautical miles (95 km) from the east coast and moving in a northerly direction, the navy spokesman, Indika de Silva, said. Earlier, it had been headed southwest.

The stricken vessel has raised fears of an environmental disaster, but two oil slicks in its trail are the result of escaping marine fuel oil, rather than leaking crude.

A fire broke out in the engine room of the Greek-owned New Diamond tanker last Thursday. The blaze was believed to have been doused on Sunday but reignited a day later.

De Silva ruled out the possibility of fire breaking out again after a team of salvage experts visited the ship on Wednesday.

New Shipping Ltd, the manager of the Panama-flagged New Diamond, has appointed SMIT Singapore Pte Ltd as its salvage expert, he said.

A preliminary investigation by the salvage firm showed the presence of a toxic gas in and around the vessel, de Silva said, but gave no further details.

Sri Lanka's Marine Environment Protection Authority (MEPA) has said it plans to take action against the ship's owner under the country's laws to protect the marine ecosystem.

The oil slicks have been sprayed with chemical dispersants from a Dornier aircraft deployed by the Indian Coast Guard.