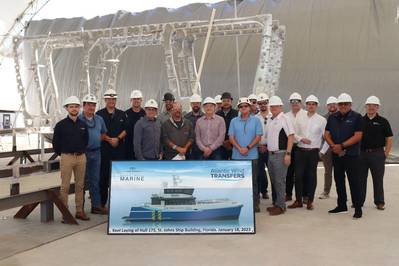 "This is another milestone for Atlantic Wind Transfers as we lay the keel for our second crew transfer vessel at St. John’s as AWT continues to expand its CTV fleet to support offshore wind construction and O&M in the U.S., said AWT founder Charles A. Donadio Jr. "AWT and its team are looking forward to launching these CTVs in the months to come and putting them right to work.”

AWT announced the orders with St. Johns Ship Building in August, revealing that the first two vessels are expected to be delivered in the summer of 2023 and January 2024, with four further builds in the pipeline. Construction for the first vessel kicked off in September.

The Chartwell Ambitious aluminum catamarans have the capacity to transport 24 personnel to and from wind turbines for construction, operations, and maintenance operations. The CTVs will be U.S. Jones Act-compliant, certified under United States Coast Guard (USCG) Subchapter L and able to operate at any offshore wind farm in the U.S. under the safety and inspection standards of the U.S. Coast Guard.

“We are very pleased to earn the trust of Charles Donadio, Jr. and the teams working with Atlantic Wind Transfers. This keel laying ceremony represents the second Chartwell designed Ambitious now under construction as we work hard to keep facility and infrastructure improvements just ahead of our construction goals,” said Jeff Bukoski, president of St Johns Ship Building, VP of business development of Americraft Marine Group. “Our diverse portfolio of projects will continue to support vessels that will help American shift towards energy independence and a cleaner, healthier environment.”